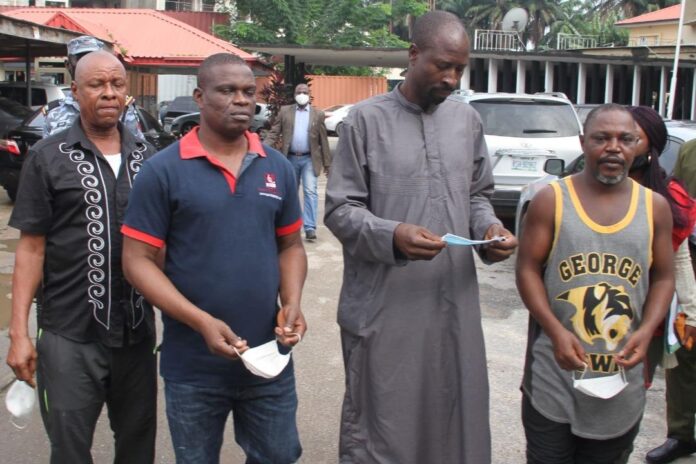 The defendants, John Omokri; Jephta Titus, Henry Egumudon and Ayakpo Abonne were arrested alongside a vessel MT IBIM, by the Nigeria Navy and subsequently handed over to the EFCC for prosecution.
One of the Counts read:
“MT IBIM, John Omokri, Jephta Titus, Henry Egumudon and Ayakpo Abonne on the 27th December, 2019 within the jurisdiction of this honourable court conspired among yourselves to commit an offence to wit; dealing in 810. 573 meric tonnes of Petroleum product without appropriate license and you thereby committed an offence contrary to section 3(6) of the Miscellaneous Offences Act, CAP M17, Law of the Federation of Nigeria, 2004 and punishable under section 1(17) of the same Act”.

They pleaded not guilty to the charges preferred against them.

In view of their pleas, prosecuting counsel, Oluwakemi Yemi Makinde, prayed the court for a trial date and also asked that the defendants be remanded in Nigeria Correctional Service, NCS.

However, counsel for the first and second defendants, E.O Ajah and 3rd, 4th and 5th defence counsels I.J Anabaraonye both prayed the court to grant them a short date for bail application.

Consequently, Justice Hassan adjourned the matter to July 10, 2020 for hearing on bail application and ordered the defendants to be remanded in National Correctional Service, NSC.

Troubles started for the defendants when they were arrested by the Navy with 810. 573 metric tonnes of petroleum products, without being licensed to deal in such products.

Dr. Olejeme who was also the Treasurer of the Jonathan-Sambo Campaign Organisation in 2015 has been on the run since 2016 and was in September, 2017, declared wanted by the Economic and Financial Crimes Commission, EFCC for criminal conspiracy, abuse of oﬃce, diversion of public funds and money laundering.

She was alleged to have, along with Mr. Umar Munir Abubakar, former managing director of NSITF, mismanaged and diverted over N69billion, belonging to the Federal Government into their personal accounts through the award of spurious contracts to proxy companies.
The forfeiture order was granted after counsel to the EFCC, Ekele Iheanacho, convinced the court that the said properties were purchased with proceeds of crime. He buttressed his position with 14 exhibits, attached to his affidavit, filed on May 29, 2020.

In granting the application, Justice Taiwo ruled that the interim order should be published in a leading newspaper within seven days of receipt of the order and for any interested party to show cause within 14 days as to why the properties should not be permanently forfeited to the federal government.

Trouble began for Dr. Olejeme, who was NSITF chairman from 2009 to 2015, when the EFCC in 2016, received two petitions detailing multi-billion naira fraud allegations against her, Abubakar and some bureau-de-change operators.

The Economic and Financial Crimes Commission, EFCC, Lagos Zonal Office, has secured the conviction and sentence of one Olaniyi Zaccheus, a former account officer of the Staff Cooperative Thrift and Credit Society of the College of Medicine, Idi-Araba, Lagos State for N4million fraud.

The conviction and sentence were done through virtual proceedings.

Zaccheus, alongside one Seyi Agbekuyide, a former treasurer of the Credit Society who later became its Vice President, were arraigned on May 6, 2015 on 13-count amended charges bordering on conspiracy to steal, stealing, and conspiracy to commit felony and forgery.
The Commission received a petition by the executive of the Society alleging fraudulent withdrawals from its account with Union Bank of Nigeria, Idi-Araba branch, amounting to about N1.5million.

Upon arraignment, they pleaded “not guilty” to the charges, prompting a full- blown trial.

Abba Mohammed, the prosecuting counsel, told the Court that the defendants had forged the signature of the former president of the Credit Society, Omolara Jimoh, to withdraw the money at various times between August 2007 and April 2009.

To prove its case, the prosecution called four witnesses, and tendered several oral and documentary evidence.
In the course of the trial, Zaccheus jumped bail, and was later arrested and remanded in prison pending the conclusion of his trial.
As the prosecution closed its case on November 22, 2016, the defendants filed a “no-case” submission, which was afterwards dismissed by the court for lacking in merit, and they were ordered to enter their defence.

Delivering judgment on July 1, 2020 during a virtual hearing , Justice Ipaye discharged and acquitted Agbekuyide, who was present in the courtroom, of the offences brought against him.
The trial judge, however, found Zaccheus, who made an online appearance from the Nigerian Correctional Facility, Kirikiri, guilty on counts two, three, four, six, and seven bordering on stealing.
The court sentenced him to three years imprisonment on each count.

The sentences are to run concurrently from the day he was taken into custody.