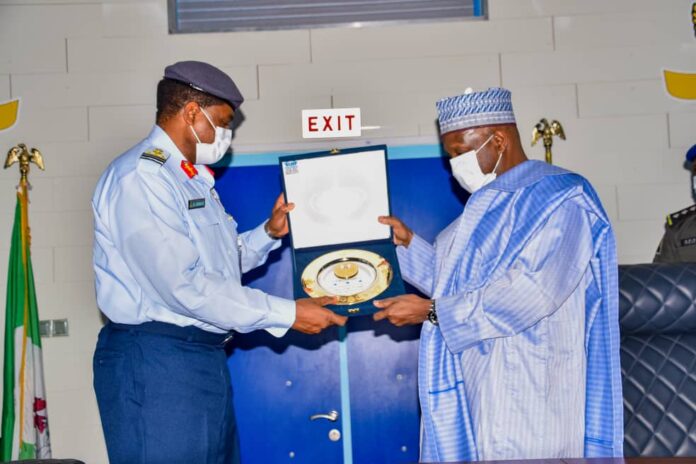 The Nigerian Air Force (NAF) is set to deploy air assets as well as NAF Regiment and Special Forces (SF) personnel to Gombe State in the North East Zone of the Country to beef up already existing security arrangements in the fight against insurgency and other related crimes in the State and Zone. This was made known today, 11 August 2020, by the Chief of the Air Staff (CAS), Air Marshal Sadique Abubarkar, while playing host to the Executive Governor of Gombe State, His Excellency (Alhaji) Muhammadu Inuwa Yahaya, at Headquarters NAF Abuja.

Speaking during the visit, the CAS noted that the NAF, in conjunction with sister Services and other security agencies, would continue to work tirelessly, round the clock, to secure the North East and defend Nigeria’s territorial integrity whilst ensuring the Nation’s sovereignty is not undermined by any group of individuals. He appreciated the laudable gesture of the Gombe State Government in providing 230 Hectares of Land to the NAF for the establishment of a Forward Operating Base (FOB) which, he said, clearly showed the Governor’s commitment towards ensuring that the good people of Gombe State and indeed the entire North East are secured. The CAS remarked that the NAF had flown an unprecedented 26,200 operational hours in the Counter-Insurgency operations in the North East, all to ensure the protection of the people and enable them pursue their legitimate aspirations without fear. Air Marshal Abubakar further reiterated that Nigeria was destined for greatness and no individual or group of individuals would be allowed to undermine its destiny.

Speaking further, the CAS noted that, since 2015, the NAF had significantly increased its presence in the North East to meet national security imperatives. “We now have the Headquarters of the Special Operations Command as well as a Reference Hospital and the 201 Composite Group located in Bauchi. We will also soon flag-off the construction of an aircraft hangar in Bauchi to enhance aircraft maintenance activities within the North East Theatre. Apart from Bauchi State, we have also established a small unit in Damaturu, Yobe State to allow us have a wider reach for our air operations. In Taraba State, we have a Quick Response Wing that is located in Gembu, an area that has suffered from farmers/herders clashes, which started about 2 years ago. The Unit, which is made up of NAF Regiment and SF personnel, has been adding value to the security situation in that general area. From what I have said, you can see that we are virtually everywhere in the North East. We recently emplaced a standard aircraft hangar in Maiduguri to improve aircraft maintenance capability. So, Your Excellency, we are highly committed to ensuring that our people are secured, because we believe, just like you mentioned, that without security there cannot be development”, he added. Air Marshal Abubakar also informed the Governor that a NAF Team would return to Gombe in the next few days to commence work on the emplacement of the necessary preliminary infrastructure for the take-off of the FOB. He noted that, as customary, the NAF would, in the long run, establish medical facilities and schools at the Base in Gombe.

Earlier in his remarks, Governor Yahaya commended the CAS for the bold step taken to establish the NAF FOB in Gombe State. He also thanked the CAS for the NAF’s consistent support and contributions towards securing the lives and properties of Nigerians in the North Eastern States. He emphasized that Gombe’s central location would be an advantage in enhancing the NAF’s operations in the North East. He noted however that the State shares borders with Cameroon, Chad and Niger Republic, which, he said, makes it vulnerable to a range of security threats. According to him, “Gombe State is blessed with Solid Minerals, Oil and Gas, and other natural resources. This has given rise to influx of people into the State which calls for more security concern. These resources cannot be harnessed until the lives and properties of the people of Gombe State are well secured.” He assured the CAS, that the State Government would provide necessary support for the smooth take-off of the FOB as well as ensure that the personnel that would be deployed to Gombe State are adequately taken care of.

Before departing HQ NAF, Governor Yahaya was led by the CAS to the NAF Memorial Arcade to pay his respects to aircrew who had paid the supreme price in the course of duty.