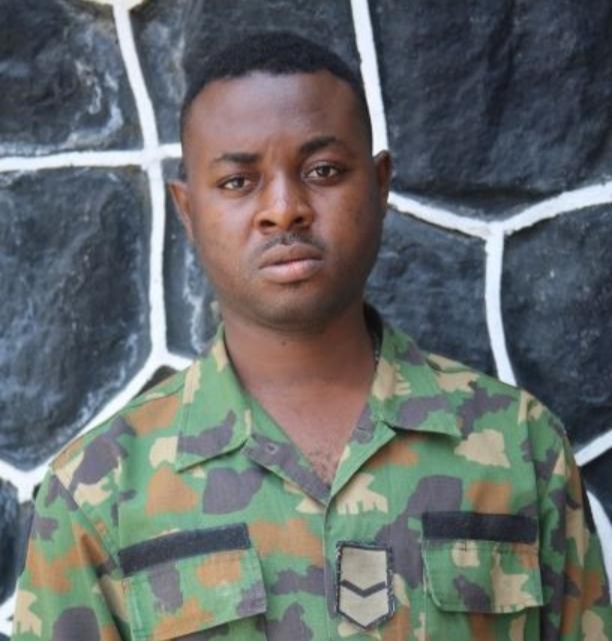 EFCC Nabs Soldier, 26 Others For Cybercrime

Operatives of the Economic and Financial Crimes Commission, EFCC, Lagos Zonal Office, has arrested a serving military personnel, Lance Corporal Ajayi Kayode and 26 others for alleged internet fraud in the Lekki axis of Lagos State.

Kayode, with service number NAF18/34732, was arrested in his military attire during an early morning raid at 6B, Fatai Idowu Arobike, Lekki Phase 1, Lagos,  on Saturday, August 15, 2020, following intelligence received from concerned members of the public about his alleged involvement in criminal activities.

In his statement to the EFCC, Kayode said the “big shot yahoo yahoo boys” in whose company he was arrested,  were his friends and that they had been teaching him how to make money through cybercrime.

While the “boys” are members of Organised Cyber Criminal Syndicate Network, OCCSN, the ladies arrested with them  confirmed the involvement of their “boyfriends” in internet fraud.

Items recovered from the suspects include diamond jewelry, exotic cars and expensive phones.

The suspects will be charged to court soon.

The Acting Chairman, Economic and Financial Crimes Commission, Mohammed Umar on Monday, August, 17, 2020, warned Designated Non-Financial Institutions, (DNFIs), across the country against un-reported suspicious transactions to appropriate government agencies.  According to him,  stiff  penalties  would be meted out to any erring DFNI in this regard.

Umar made the declaration at EFCC Academy, Karu, Abuja, during the opening ceremony of a four-day training on “Asset Tracing and Investigation,” organized by the EFCC  for its officers, drawn from its 14 zonal offices.

The training, which is aimed at further equipping the Commission’s officers with skills on how to trace, identify and recover proceeds of economic and financial crimes,  runs alongside  another course on Microsoft Excel, geared towards aiding investigative officers in building database, and skill acquisition on chart linking on recovered assets.

Represented by the Academy’s acting commandant, Itam Nnaghe Obono, Umar stated that “If any of the defaulting DNFIs is penalized and used as an example, others will all wake up to complying with the requirement of the law which mandates them to report all transactions within a stipulated threshold.”

DFNIs are statutorily required to file reports of suspicious transactions to the Special Control Unit Against Money Laundering( SCUML), domiciled in the EFCC.  Their non-compliance may yield prosecution of any erring institution or individual.