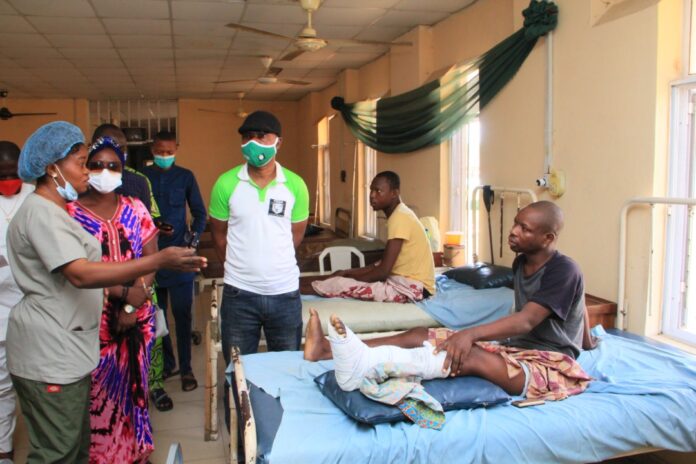 Irked by the inability of some indigent patients who received medical treatment at the various hospitals in Lagos and Ogun State, the PEGA & Friends Foundation (P&FF), a non-governmental organisation (NGO), has paid their hospital bills and united them with their families.

The patients, who had stayed in the hospitals for between two and six months after their cure and subsequent discharge due to lack of money to offset their medical bills, resigned to fate before the PEGA and Friends foundation came to their aid and brought succour to them.

Many of the patients who came from various parts of Lagos state as well as Ogun State were in the children, surgery and orthopaedic wards of the hospitals.

They were treated of various ailments, accidents, delivery and were given medical bills. But due to lack of money, they were hanging around the hospital waiting for money to clear their bills before they could go home.

The founder/Director of the foundation, Prince Ekunola Gbenga Abraham (PEGA), while addressing the management and patients at General Hospital Badagry, praised the hospital management for the care and the patients for their cooperation.

Ekunola revealed that the programme started since 2010 but fully registered as an NGO in 2015.  “With the support of friends, the programme had been sustained since then,” he said.

PEGA disclosed further that the foundation was focused at enhancing the quality of life of Nigerians by promote health, socio-economic development and status of vulnerable and disadvantaged women, children, youths and men in community and welfare, character management & rehabilitation programs for inmates.

He said, “We go round Nigeria to help the underprivileged in the society and this we have been doing over the years. To change our society and make the world a better place we must love, give and share no matter how small.”

The Director also revealed that many indigent patients were discharged through the foundation, adding that they were released in Ore-Ofe Private Hospital Ilaro, Ogun State and General Hospital Badagry in Lagos State. Among the beneficiaries is 8-days old baby that was abandoned at the road ride in Badagry who is currently taking care at the Badagry general Hospital.

Oba Akran of Badagry, His Royal Majesty, De Wheno Aholu Menu Toyi 1 praised the vision and humanitarian service rendered to the indigent patients and Badagry community by the Pega and Friends Foundation, even as he urged other individuals and organisations to emulate the gesture.

Responding, the Deputy Medical Director of the hospital, Dr Olatunde Bakare, praised the NGO for its gesture, saying that it had set a pace for others to follow.

The patients expressed their gratitude to the NGO for paying their hospitals bills.

The foundation also visited Hephzibah homes in badagry, where materials of different kind and food items were donated to the orphans.

Ekunola, confirmed the adoption of three (3) children of late Madam Kemi Adepoju who died of cancer in Ibadan which made the children to become orphans, and nobody is ready to take responsibility including the professor that was standing in between the family at initial stage.

As part of activities marking the annual get-together of the foundation, it has extended a hand of fellowship to the sick, widows and orphans as part of the foundation’s goals to alleviate poverty and improve living conditions by distribution of different kind of food items to the aged and less privileges in different villages across the nation.

Other side attractions of the program was the visitation of the Palace of Akra of Badagry, seaside, first upstairs in Nigeria, “Slave point of no return”, slave market, first church in Nigeria and many other places and the get-together party and general meeting to roundup the occasion.