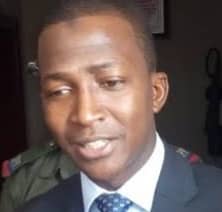 In a letter to President of the Senate, Ahmad Ibrahim Lawan, the President said he was acting in accordance with Paragraph 2(3) of Part1, CAP E1 of EFCC Act 2004.

Bawa, 40, is a trained EFCC investigator with vast experience in the investigation and prosecution of Advance Fee Fraud cases, official corruption, bank fraud, money laundering, and other economic crimes.

He has undergone several specialized trainings in different parts of the world, and was one of the pioneer EFCC Cadet Officers in 2005.

Bawa holds a B.Sc degree in Economics, and Masters in International Affairs and Diplomacy.

Femi Adesina
Special Adviser to the President
(Media and Publicity)February 16, 2021

Who is ABDULRASHEED BAWA: New EFFC Boss
Bawa hails from Jega Local Government Area of Kebbi State, Northern Nigeria. He is a trained EFCC investigator with vast experience in the investigation and prosecution of Advance Fee Fraud cases, official corruption, bank fraud, money laundering, and other economic crimes.
The 40-year-old has undergone several specialised trainings in different parts of the world. He is a Certified Fraud Exerminer (CFE), Certified Anti-Money Laundering Specialist (CAMS), and was also trained by the United States Federal Bureau of Investigation (FBI), United States Financial Crime Enforcement Network (FINCEN), the World Bank, the United Nations Office of Drug and Crimes, the Nigeria Police Force, the Nigeria State Security Services, the EFCC Academy and United Kingdom’s Global Training Consulting.
Furthermore, Bawa was part of the pioneer EFCC Cadet Officers; course one, 2005. He is credited with successfully investigating and testifying in the prosecution of several cases, leading to convictions and recovery of billions of naira and millions of US Dollars in cash and properties across the world.
Bawa holds a Bachelor of Science Degree in Economics (Second Class Honours, upper credit) from Usmanu Danfodio University in Sokoto State, northwestern part of the country. In 2012, he obtained a Masters in International Affairs and Diplomacy from the Usmanu Danfodio University. He is currently studying for a Bachelor of Laws (LLB) degree at the University of London.
He has attended several conferences and seminars. They include ACAMS Global 24+ Virtual Conference (2020), ACFE Global Fraud Conference, Las Vegas, USA (June 2018), Global Forum on Assets Recovery (Gfar), Washington DC, USA (December 2017), and UNCAC Open-ended Intergovernmental Working Group on Assets Recovery, Vienna, Austria (August 2017).
Others are UNCAC 8th Intersessional Meeting-Open-ended Intergovernmental Working Group on Prevention, Vienna, Austria (August 2017), Nigerian Economic Society Annual Conference, Calabar, Nigeria (2009), EFCC Best Practices Manual Drafting Convocation (April 2017), EFCC Best Practices Manual Workshop (July 2017), EFCC Best Practices Manual Workshop (August 2017), Nigerian Economic Society Annual Conference Calabar, Nigeria (2009).
In 2004, Bawa became an Assistant Detective Superintendent (ADS) in the EFCC. He progressed to the rank of Deputy Detective Superintendent (DDS) in 2007. He rose to become a Senior Detective Superintendent (SDS) in 2010. In 2013, he became a Principal Detective Superintendent (PDS). His last promotion was to the rank of Deputy Chief Detective Superindent (DCDS) in 2016.
Bawa has overseen several notable cases in his time at the top anti-corruption agency. He supervised the biggest operations zonal office of the EFCC in Lagos, having 604 officers and securing 227 convictions.
He supervised the investigation of all cases in the Port Harcourt Zonal office in which an unprecedent 215 convictions were secured in eleven months. He also secured the final forfeiture of hundreds of properties to the Federal Government.
The new EFCC boss supervised the investigation of all cases in the Ibadan Zonal office in which 113 were concluded and 54 were charged to court within 6 months.
He was involved in the recovery of millions of dollars worth of properties belonging to former Minister of Petroleum Resources, Diezani Allison-Madueke. He was also involved in the fraud cases involving former Governor of Niger State, Dr. Muazu Babangida Aliyu. He equally participated in several other Periodic Raid on Notorious (419) Cyber cafés.
Bawa has received numerous awards and commendations in his time at the EFCC. He received the Economic and Financial Crimes Commission Merit Award in 2020.
He earned the appreciation of the US Federal Bureau of Investigation (Criminal Investigative Division) in 2019 after facilitating the collaboration between the EFCC and the FBI, which resulted in a mutual fight against Economic and Financial Crimes on an international scale.
In 2014, Bawa received the 10 Years of Service Award in recognition of his continued commitment and contributions to the Anti-Corruption efforts.
He belongs to professional organisations including Nigerian Economic Society (Member), the Economic Institute (Associate), Association of Certified Fraud Examiners (Certified), and Association of Certified Anti-Money Laundering Specialist (Certified).
Bawa enjoys watching Football &Tennis, Reading, Current Affairs, and International Politics.