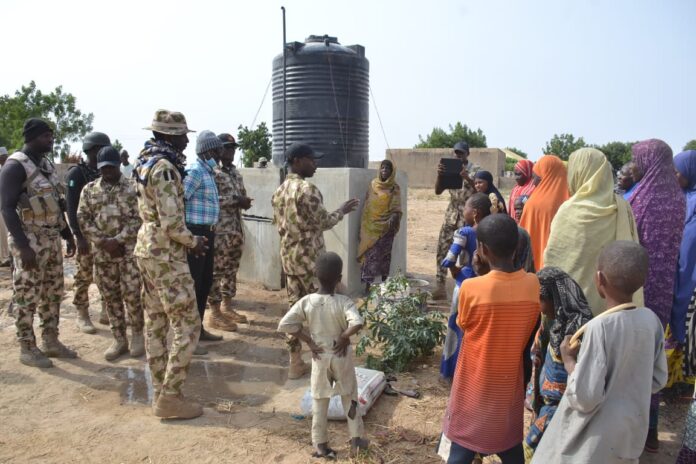 In its humnanitarian efforts geared at winning the hearts and minds of the civil population, soldiers of 195 Task Force Battalion, fighting Boko Haram in the North-East have constructed a mechanised borehole for Zinnari-Madinatu community in Jere Local Government Area in Borno state.

While presenting the facility to leaders of the community on Friday, Maj.-Gen. Abdul Khalifa, the Acting General Officer Commanding (GOC) 7 Division of the Nigerian Army, said the gesture was to alleviate the hardships experienced by the people in accessing water.

Khalifa, who was represented by Lt.-Col. Andrew Wuyep, Commander of 195 Battalion said that the Nigerian Army would construct more boreholes in other communities in its efforts to contribute towards socio-economic development.

He said that it had been intimated of the plight experienced by the community and environs which prompted the execution of the project.

“The borehole would help reduce health issues associated with drinking unclean water, and also save time and resources involved searching for water in communities.

“At the same time, it will provide a favourable platform to sensitise the people on the need to be security conscious and responsive in reporting to the security agencies any suspected movement or strange activity that would breach peace,” he said.

The GOC encouraged the locals to utilise the facility generously for a long lasting effect while in turn support own troops by timely information gathering and sharing.

Zannah Mustapha, a resident of the community commended the GOC for the gesture and urged other well meaning Nigerians to contribute towards the development of deprived communities.