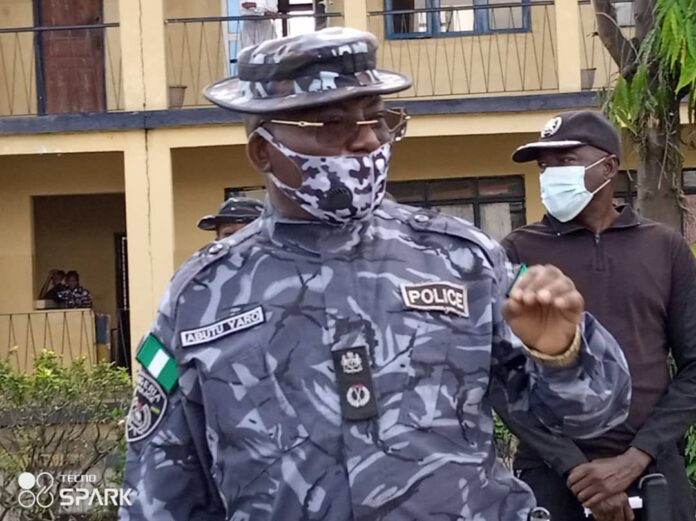 In line with the directive of the Inspector General of Police, IGP Alkali Baba Usman, as well as the mandate and determination of the new Management of Imo State Police Command, in providing peace and tranquility in the State, the Commissioner of Police, CP Abutu Yaro, fdc, activated the OPERATION SEARCH AND FLUSH at the State Police Hqrs Owerri.

The CP while deploying the men charged them to do their jobs creditably and ensure that the interest of the members of the public is paramount while discharging their duties. He also warned them to be swift in the response to distress calls. He also charged them to neutralise any bandit seen in order to ensure that Imo State returns to its rightful place as the most peaceful state not just in the South East but the nation at large.

Furthermore, the CP informed the men that the state government led by Dist. Sen. Hope Uzodinma has made adequate arrangement for their welfare, stating that allowance will be promptly paid, medical arrangements has been emplaced in case of any injuries in the course of the operation, and also the arrangement of logistics and equipment supports for the operation. He therefore charged the men to resciprocate the gesture by provided quality Police service delivery to Imolites.

The Commissioner of Police said the teams will be posted to all the Local Government Areas in the State for crime prevention /detection patrol as well as confidence building patrols, warned the men against extorting and other corrupt practices, or any form of ineptitude, as the Command will not hesitate to activate the force disciplinary mechanisms on anyone found culpable to any unethical conduct. Also, While admonishing the men to be professional at all times, and also be good ambassadors of the force, he tasked them to occupy the public space and ensure visibility around their duty post at all times.

On 17th May, 2021, operatives of the Command’s Quick Intervention Team QIT arrested one EZE OBINNA “M” 35 yrs old, a native of Amaimo, Ikeduru Local Government Area of Imo state, over his involvement in series of kidnap incidents lately.

The operatives while acting on the directives of the Commissioner of Police, CP ABUTU YARO, fdc. To rid Imo state of crime and criminality.To take the war against violent crime to the den of the hoodlums, as well as rearrest the escapee inmates of the Correctional services. Stormed Obinze, Owerri West LGA, Imo State, arrested the said Eze Obinna whom has since his escape from the Prison, formed another deadly kidnap gang and have been terrorising Owerri and environs.

Recall that sometime in December 2020, the suspect was arrested by the operatives of the Anti Kidnapping unit , for kidnapping a victim, where he personally transferred the sum of five Million Naira (N5,000,000) from the victims Bank account to his own account, and later collected the sum of four Million Naira (N4,000,000) cash, as ransom from the same victim, while the victims Toyota Venza car is yet to be recovered. Three AK 47 Rifles with large number of ammunitions were also recovered from them then. They were charged to court and remanded in Prison custody. However, they were set free during the attack on the Correctional services on 5/4/21.

The Commissioner of Police has ordered the arrest of all his gang members, as well as moping up their operational arms, efforts is ongoing in that regard, while investigation is ongoing.