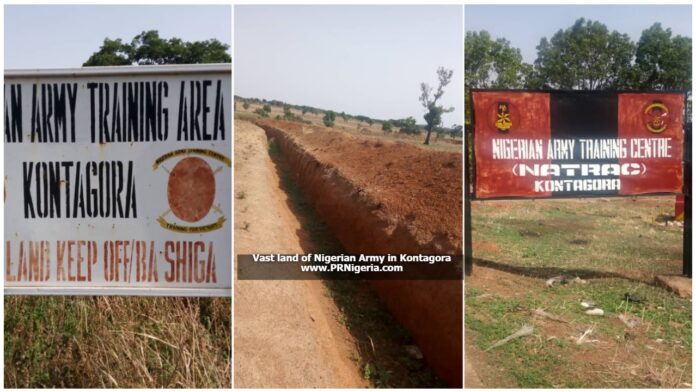 Concerned about the development, the Nigerian Army under the current leadership is devising new measures to tackle the activities of the criminals on its land and in neighbouring communities.

The bandits have established their camps at Matan Kari, Fagai, Ozowo, Bihima and Kan Libo, among other mountains inside the army land.

The camps, according to checks by PRNigeria, are mountainous areas, within the massive hectare, where the criminals first gather their abducted victims, before moving them to Kaduna, Zamfara and other Northern States, via forests’ paths.

They are also being used by bandits operating within the axis to congregate herds of rustled cattle, before ferrying them beyond the State’s borders.

The ‘flat and levelled surfaces’ on top of the mountains, according to an undercover security officer and some locals, is where a yet-to-be-identified private helicopter often ‘touches down’.

They, however, could not tell who owns the helicopter, and the mission it regularly undertakes to the bandits’ hideouts.

He also told PRNigeria that whenever the white helicopter hovers around communities within Kontagora and Mariga axis, bandits’ attack follows.

It was learnt that a team of policemen and local vigilantes embarked on daring missions to the notorious camps of the bandits, on three separate occasions last year.

Images of some items discovered on the mountainous hideouts, which include syringes, cans of soft drinks, spare parts of motor cycles, plugs, among other relics, were sighted by PRNigeria.

The huge army land, which starts from the military Barrack in Kontagora town, extends over to Mai Guge community, in Mariga local government. It is almost 40km in length.

Credible sources said not only banditry, and kidnapping, but illegal mining secretly thrives on the land, too.

Though the expansive army land is yet to be fenced, a deep pit apparently for a foundation has been dug, right after the Barrack gate, before entering Kontagora metropolis.

The army, at various points beside the Kontagora-Mariga road, mounted the signage of their land, indicating ownership.

It warned trespassers to keep off.

PRNigeria learnt that the Kambaris, were the original owners of the land. But they sold it to the army, over 30 years ago.

And while the Army is yet to start training its personnel, bandits have found ‘haven’ in the fallow land, using it to carry out their terror-inducing crime.

There are several instances, where bandits emerge from various points in the army land, some of the displaced villagers told PRNigeria.

They then, cross the kontagora-Mariga road to attack Usande, Magauta, Dutsen Magaji, and other sparse communities, on the other side of the highway.

A seasoned intelligence officer working for a security agency in Kontagora, who declined to give his name, said the ‘unfenced and porous’ army land is the reason bandits have been having a field day invading communities and wreaking havoc, across parts of Niger East.

He said the bandits’ camps also served as escape routes for the criminals when other security personnel are mobilized for counter and rescue operations.

He said when bandits attack communities surrounding Kontagora town, they fled with their victims and rustled cattle to their camps inside the army land.

“Unfortunately, the army will deny us permission to chase the fleeing criminals. We have, on several occasions, informed the military authorities that their domain is used by bandits for cover, but they refused to cooperate with us, often telling us that the people our intelligence reports indicate are bandits, are actually not,” he added.

From banditry to Boko Haram.

“The Power State” as Niger State is fondly called may be battling to contain the flame of banditry which had since engulfed the entire “Zone C”, when only recently, Governor Abubakar Sani Bello confirmed the presence of Boko Haram terrorists in the State.

He told newsmen, after visiting Internally Displaced Persons (IDPs) at their camp in Minna, that the insurgents also hoisted their flag in Kaure, Shiroro Local Government Area.

Cries of an Emirate

Due to the vastness of the army land, it was learnt that the Kontagora Emirate Council had long suggested the reduction of the plot, and leasing it out to people to inhabit.

Yet, their genuine concern and worries seemed to have been taken for a levity.

Sometime between November and December last year, PRNigeria learnt from credible sources, that the Kontagora Emirate requested for deployment of military troops to tackle the rampaging bandits, in its domain.

“Responding, the military authorities deployed a battalion of Special Forces troops. Before they will be moved into Kontagora, we learnt they were first briefed in Minna.

“The Commanders of the troops were told to first meet with the Police when they arrive Kontagora, to strategize on how to storm the bandits’ hideout. But they did not. They ignored us and ‘callously’ stormed the notorious camps of the bandits.

“At the end of the day, about seven or eight of the special forces soldiers were killed, after their convoy was ambushed by the bandits,” a security source in Kontagora town told our PRNigeria correspondent in a chat.

It was after that incident, the military, our source, said realized the intensity of banditry within Kontagora axis.

He added: “At the moment, the army in Kontagora employs the services of local vigilantes to help them secure their massive land.”

Speaking to PRNigeria, the Dagachin Fagai in Kontagora, appealed to the government to come to the aid of their long-suffering people.

He however, commended the Niger State Commissioner for Local Government Community Development and Chieftaincy Affairs, Barr. Abdulmalik Sarkin Daji, for promptly responding to their plights whenever he is called upon.

“The Nigeria army, here in Kontagora too, must prove that they are serious about dealing with the bandits, contrary to claims in some quarters, that they are having sympathy for the blood-thirsty criminals,” he added.

A 63-year-old farmer, Mall. Ibrahim Sarkin Zango, whose cattle was recently rustled by bandits at his Farin Gida village, advised the federal government and the military authorities to deploy extra troops to patrol the barrack’s vast land and communities worst hit by banditry.

“Let the Army quickly construct a fence for their land since a foundation pit has already been dug. They can also build Satellite Camps and even Super Camps in various places within the land. Then, I will call on them to forge a synergy with the police and other security agencies across the entire Niger East, not only within Kontagora and Mariga local governments,” Sarkin Zango said.

Meanwhile, a top military officer in the area told PRNigeria that Nigerian Army has deployed extra troops to the state to protect the citizens.

The officer who pleaded anonymity said the situation at the barrack’s vast land and communities worst hit by banditry is being looked into for prompt actions.

“I am aware that the Nigerian Army under the current leadership of Chief of Army Staff, Lt General Ibrahim Attahiru has given directive on the need for the fencing, especially some strategic portions of the land since a foundation pit has already been dug.

“The military high commands is also considering the probability of building Satellite Camps and even Super Camps in various places within the land. The interesting thing now is the fact that there has been a tremendous synergy of the military, the police and other security agencies across the entire Niger State, not only within Kontagora and Mariga local governments,” the source added.