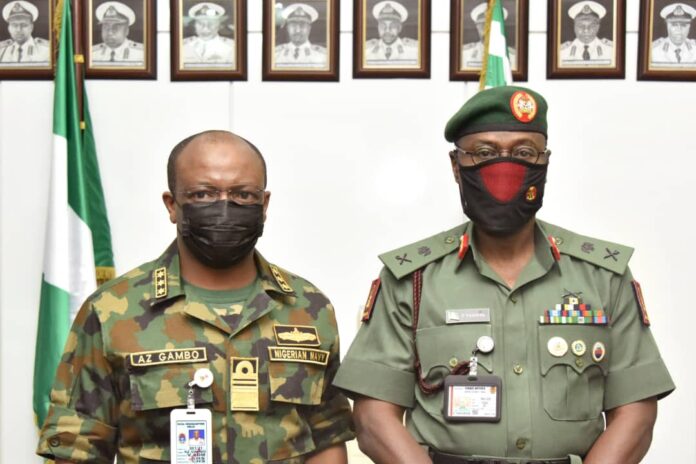 Chief of the Naval Staff (CNS), Vice Admiral Awwal Gambo has emphasized the need for constant synergy between the Armed Forces of Nigeria in order to ensure success in various operations. He made the call when the new Chief of Army Staff (COAS), Major General Faruk Yahaya paid him a courtesy visit at the Naval Headquarters.

The CNS submitted that the COAS coming from the theatre of operations has a good appreciation of the challenges in the North East, North West and across the spectrum of the country and therefore urged Major General Yahaya to use the knowledge at his disposal towards ensuring that victory is won over the insurgents. Vice Admiral Gambo equally urged the COAS to pick up from where the late COAS, Lieutenant General Ibrahim Attahiru left from and improve upon those ideas.

Speaking earlier, the Chief of Army Staff, Major General Faruk Yahaya said he was in the Naval Headquarters to formally inform the CNS that he had reported and taken over duty following his appointment as the 22nd COAS. The COAS also pledged to work in synergy with sister Services as none of the Services can do it all by itself. Major General Yahaya promised to ensure cooperation with other security agencies and stakeholders as the challenges confronting the security agencies are multi-faceted and would require a multi-faceted approach.

SULEMAN DAHUN
Commodore
for Chief of the Naval Staff