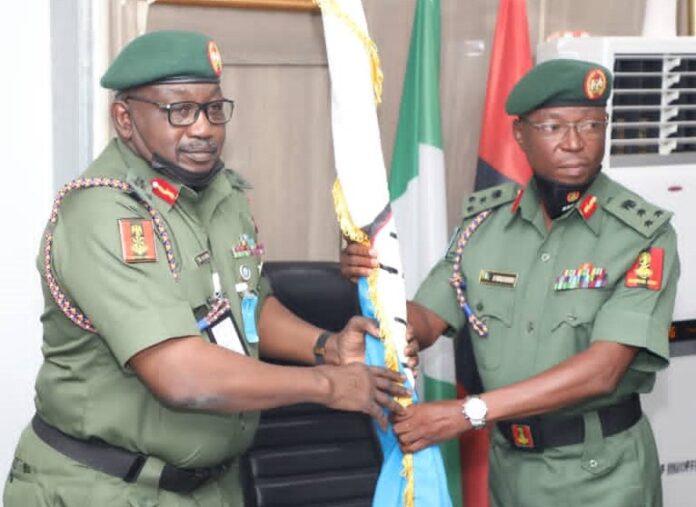 Brigadier General Nwachukwu made the comendation during the ceremony of the formal handing and taking over ceremony of the Directorate of Army Public Relations, Army Headquarters, Abuja.

He said that the complex nature of security challenges being experienced in the country require a multi-disciplinary approach and the role of the media as a stakeholders is a very vital one.

Nwachukwu emphasized that to surmount these challenges, the Nigeria Army and the media must be partners in progress in order to berth the peace and tranquility desire as a people and as a nation.

On his predecessor, Onyema said: “I must recognize the immense contributions of my boss, the immediate past Director Army Public Relations, Brigadier General MM Yerima. Sir, on behalf of officers, soldiers and civilian Staff of the Directorate of Army Public Relations, I will like to appreciate you for the laudable feats recorded during your tenure. May I also assure you that I intend to consolidate on your successes. Please be rest assured that we will often times consult with you to seek your professional guidance as a seasoned Public Relations practitioner.”

The new Army Director said he remains eternally grateful to God while appreciating the Chief of Army Staff, Major General Faruk Yahaya for his appointment and the Chief of Defence Staff, General Lucky Irabor for his encouragement during his tour of duty as the immediate past Acting Director Defence Information.

“I have no doubt, in my mind of the responsibilities of my office as the Director Army Public Relations, which is summarily to project the activities of the NA with the objective of galvanizing public goodwill and support for the NA, as its strives assiduously to surmount contemporary security challenges bedeviling our nation. Permit me to note here, that it is an indisputable and very well established fact, that the sword or gun cannot alone, provide a panacea to the complex and multifaceted security challenges that characterize today’s world”

On his part, the outgoing Director, Brigadier General Yerima, was full of appreciation to the Late Chief of Army Staff, Lieutenant General Ibrahim Attahiru for the opportunity to serve as the Director Army Public Relations, and the the staff and officers for their support while requesting that the same cooperation that was given him be accorded to the new director, whom he extols as a fine public relations practitioner.

Highlights of the occasion in Abuja, which was attended by the President of the Nigerian Institute of Public RElations (NIPR), Mallam Mukhtar Sirajo was the signing of handing and taking over note by the outgoing and incoming Director.

The recently appointed Director Army Public Relations, Brigadier General Onyema Nwachukwu has taken over command as the 23rd spokesperson for the Nigerian Army. He assumed command today 16 June 2021 in a colourful ceremony held at the Army Headquarters, Abuja. Until his appointment, he was the acting Director Defence Information (DDI) at the Defence Headquarters.

Speaking during the handing and taking over ceremony, Brigadier General Nwachukwu thanked the Chief of Army Staff (COAS) Major General Faruk Yahaya for finding him worthy to be appointed the Army Spokesman. He congratulated the outgoing Director, Brigadier General Mohammed Yerima for a successful tour of duty.

General Nwachukwu noted that the era of Information Communication Technology (ICT) has made it easier for speedy dissemination of information to the general public stressing that it has brought about additional challenges to information managers. He revealed that strengthening Military -Media relationship is his topmost priority, even as he extolled the media for supporting Nigerian Army Operations through balanced reportage. He further charged the media to remain committed in the discharge of their professional duties by adhering to the ethics of journalism.

He pledged to evolve measures and potent ways that could improve and strengthen the existing relationship between the Nigerian Army and the Media, with a view to consolidate on the gains already made in the ongoing war against insurgency, terrorism, banditry, Kidnapping and insurrection amongst other sundry crimes in the country. He added that the NA under the leadership of Major General Faruk Yahaya would continue to value the partnership and cooperation of the media and other institutions with mutual respect and cordiality.

Earlier in his valedictory speech, the immediate past Director Brigadier General Mohammed Yerima congratulated the Director on his appointment and wished him a successful tour of duty. He commended Officers, Soldiers and Civilian Staff of the Directorate for their loyalty, support and commitment. He further enjoined them to extend same to the new Army Spokesman. Brigadier General Onyema Nwachukwu
was born on15 June 1968 in Ibadan but however, hails from Ndokwa West Local Government Area of Delta State. He is an alumnus of the University of Ibadan, holds a Masters Degree in International Affairs and Strategic Studies from the Nigerian Defence Academy (NDA) Post Graduate School, Kaduna. He also has a Post Graduate Diploma in Advertising and Public Relations from the International Institute of Journalism Abuja. He is a member of the Nigerian Institute of Public Relations. Since his commission into the Nigerian Army, Brigadier General Nwachukwu has attended several military and professional courses, as well as seminars within and outside the shores of Nigeria. These include; Deputy Spokesman/Media Operations Course at the Joint Information Activities Group, Royal Airforce, Halton United Kingdom and Special Operations Command Course at the Shijizhuang Military Academy, China. He has equally attended Strategic Communication Course at the Nigeria Army School of Public Relations and Information, Lagos and the Counter Terrorism Course, at the Infantry Corps Centre, Jaji, Kaduna State. The new Army Spokesman has served in various Units and Commands within and outside the NA. He was Deputy Director Public Relations, Headquarters Theatre Command Operation LAFIYA DOLE and 8 Task Force Division, Assistant Director Defence Information (NA), at the DHQ, Chief of Staff Headquarters Directorate of Army Public Relations, and Public Relations Officer Nigerian Defence Academy(NDA). Additionally, he once served as the Media Coordinator, Joint Task Force Operation PULO SHIELD, Yenagoa, Bayelsa State.

The handover ceremony was witnessed by Senior Officers and Staff of the Directorate of Army Public Relations, as well as the National President, Nigerian Institute of Public Relations (NIPR), Mallam Mukhtar Sirajo, among several other dignitaries.

Highlights of the event were the signing of handing and taking over notes, presentation of the command flag and decoration of the new Director with insignia.