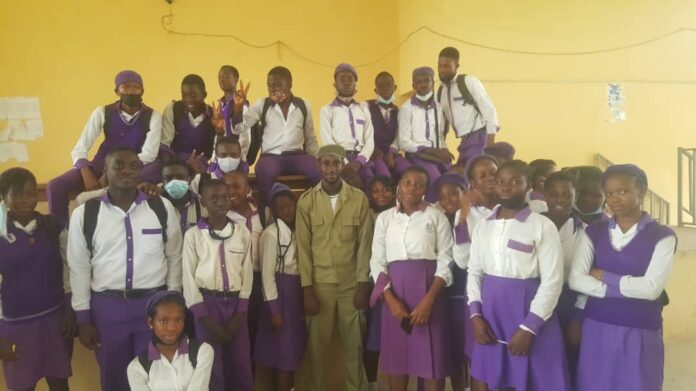 They were for the science students in both schools.

Aside the awareness program, Mr. Farouk Ahmad, an indigene of Kano State, will also coach the SS 3 science students of the two schools on Physics, Mathematics, Chemistry and Further Mathematics, geared towards them passing their forthcoming ‘O’ level examinations.

The extra classes for the final-year students, and awareness talks, together with the installations of solar electric system, and security lights, are the three-in-one part of his personal Community Development Service (CDS) project.

Ahmad, who is presently attached to the foremost construction firm, Julius Berger Nigeria, during a session with students of GSS Wuse, noted that science has shown that solar energy will not run out in the next five billion years.

“And that is what makes it renewable. But instead of using solar energy, now we are using coal, oil, natural gas and other sources of energy, which are not renewable and will eventually run out,” he said.

The school Principal and the Head of Science Department, in their respective remarks, appreciated Farouk Ahmad for organizing the sensitization lectures, which they said had imparted sound knowledge about solar electricity on their students.

On the practical installations of solar systems at the two secondary schools, Ahmad, who is a Second Class Upper graduate of Electrical Engineering from the Bayero University, Kano (BUK), said: “These interventions, will greatly help to provide alternative power sources to GSS Jabi’s Computer Room, while also illuminating a part of GSS Wuse to aid vigilance by the security guards at night.”