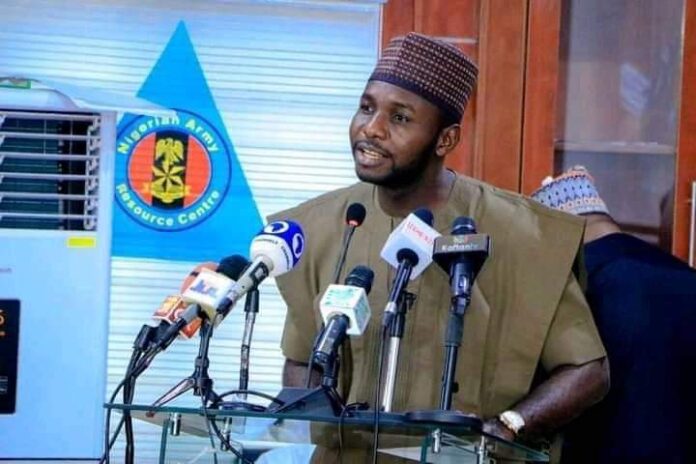 “In life, push even when there is no need…”

One thing I have come to learn about life in my counted years of infantile existence is the realisation to create a niche for yourself. In this life, no one will help you create your identity, not even the wealth of your parent would. Who you become is absolutely your cup of tea, nothing guarantee sustenance than your personal effort backed up of course by God!

Every phase of my life is dotted with an unquenchable zeal to break the glass ceiling. I have never let a moment passed me by. I remember even as a lad – I was barely 10 years old. I would sneak out of the house and follow some guys older than me to the present Nuhu Bamali Polytechnic, Gaskiya Zaria to fetch water for students. While other boys troop to the boys’ hostel, I chose the girls hostel. The girls are naturally generous with money. I was making money as a child and saving them. Life dealt me a deadly blow when my dad traced me to the school and caught me fetching water. He didn’t only end my hustling voyage, he left some penetrating marks on my young body. According to him, why should his son be running errand for money? Something however happened one day, my mum got choked on asthma attack. My father wasn’t home and she needed Ventolin inhaler to breathe again. My mother was sailing away as she gasped for air. Boom, it struck me that I had some money I have saved during my water fetching hustle. I dashed there and saw N20, I didn’t know I had saved that much. Big money for a 10-year-old boy! I got the inhaler for N5 and my mother was saved! That was in 1989!!.

My father is a proud man defined by the maxim of old ego. He hated me going out too early with the toil of life. He was protecting me and protecting his ego as well. According to him, a child should be at home waiting to be catered for. I revolted against his posture and we never had that smooth sail. To him, I was too in a haste for life. I refused to cave in to his dictates of waiting for time to meet me, instead, I go after time, for this time you see never wait for anyone.

By the time we moved to Abuja in the early 1990s, I had become a proud owner of a wheelbarrow. While my mates sit in the dictates of time, I joined other elderly folks to carry wares for people in the market. I was a super wheelbarrow pusher. Karu market in present-day Abuja was my refuge. Every five market days saw me saving money. While dad frowned at my too young to make money, my mother encouraged me to share my time between my books and what gives me pleasure. I gained my victory when dad once asked me for money, that day registered my first day of fatherly endorsement for an infantile hustle. I got my teenage liberty from my dad in 1993.

I graduated from a wheelbarrow pusher to a butcher, I became Mai nama. This time, I started counting money in 4 digits. I was in junior secondary school. I got sneered and jeered at by mates who saw me selling meat. When you hear, ‘Haruna Mai Nama’, that was me in reference. It never bothers me, after all, my mother was happy and that was all that matter.

By 1995, something big hits Abuja, massive construction enveloped the city. Everywhere was a construction site, and those to do the work was a problem. That was how I diversified into construction ok, this time as a labourer. While we earned huge money every day, the burden of toils awaited us at the end of the day. Not to talk of the chemical in cement eating deep into our feet. I had sores around my feet.

God, young age has that unmatched advantage sha. While I carried blocks and pans of cement, I would still read at night. I balanced my time for instant wealth and future wealth. I never allowed my studies to suffer. In fact, I maintained a convincing lead in my class.

Fast forward to my graduating time from secondary school, around 2001. I had become a peer health education mentor. The NGO that came to teach us on reproductive health found me worthy and gave me a job as a volunteer. Yes, I became employed right from secondary school. The period I awaited to be admitted saw me earning N2500 every month. This NGO helped to hone my aspirations as I developed the spirit of networking. Lest I forgot, a hotel hired me as a security guard with an enticing offer of N5000 every month, motivated by the desire to have more money, I gave it a try. On the first day of work, marched with a starched khaki, I walked around in surveillance. I was so gallant that I got salutes from my supervisor. Everything changed around 2 pm while in routine patrol of the building, I saw the laundry room stacked with heaps of clothes. The man in me said no, but the body in me said, guy, sleep is better than walking. And I buried my body in the heaps of clothes and dosed into what I think is one of the sweetest sleep I ever had. I didn’t know for how long but I was awakened by a flood of light in my eyes. My supervisor had traced me to my sleeping abode. With a start, I jumped up in full salute as the man laughed his heart out. The next day, I went back to my NGO work where I could sleep and not be worried about nocturnal surveillance!

The story continued, this time in the university. I was a student but interacting more with the management. I was drafted into the school HIV/AIDS committee. After every sitting, I was making money. In between that, I was editing the Sardauna magazine. By the time I was leaving the university, I had become the editor of the magazine. I stopped getting money from home because I was exploring the opportunities in the school. I wrote a book titled ‘quotes of the Masters’ and sold plenty of copies to students. Las las I ended up becoming the faculty president!

I failed a course and that got me an extra year! That didn’t deter me but motivated me the more. While in this trance, I got hired to serve as a media aide to late Osotimehin, then Minister of Health. I was making money and garnering experience. By the time he was leaving, I had become a publisher of the World entourage Magazine. A ventured that opened the vista to my many other exploits. Amina Mohammed, present Deputy Secretary-General of the United Nations hired me as a media aide and so did other people who got me on their payroll.

In 2017, I got selected for the prestigious Mandela Washington program where I spent time in the USA learning new insights of life. Between my days as a child hustler and now as an adult hustler, a lot has happened. From a daring push of a child to a sustaining thrust of a teenager now to a fulfilling count of an adult, one thing has remained constant, the love and mercy of God! I have so enjoyed his grace and can’t thank him enough.

All my life, I wanted to be read, today, I am being read. To God be the glory. My book ‘The Buhari In Us’ is a demonstration of a dream come true. I am super excited and can’t but dedicate this feat to the loving memory of my mother, Mama Zainab who hurriedly left without waiting to put down the pot she placed on fire’.

My name is Haruspice and this is my story as a hustler.
Happily musing

Haruna Abdullahi is the author of “The Buhari in Us.”