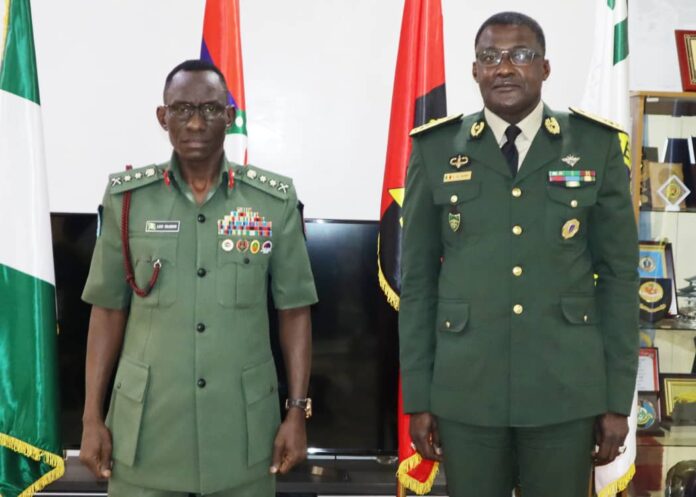 The Chief of Defence Staff (CDS), General Lucky Irabor, has called for concerted efforts of stakeholders in combating transnational terrorism in the West African Sub-region.

The CDS made the disclosure today 30 June 2021, while granting audience to the Inspector-General of the Senegalese Armed Forces (SAF), Major General El hadji Daouda Niang, in his office at the Defence Headquarters, Abuja.

The CDS stated that transnational nature of global insurgency and terrorism required collective efforts by armed forces to restrain the movement of criminal elements operating within the Sahel region and the Lake Chad Basin.

Gen Irabor further explained that the collaboration would significantly restore peace in the West African sub-region. He commended the SAF for playing a pivotal role in curtailing the trans-Sahelian movements of criminal elements in Mali.

Gen Irabor disclosed that Nigeria and Senegal could strengthen the existing diplomatic and defence collaboration by leveraging their Armed Forces operational and training experiences for greater effectiveness and efficiency.

The Inspector General General of the Senegalese Armed Forces, Major General El hadji Daouda Niang, said the purpose of his visit was to access the operational engagement of the Armed Forces of Nigeria (AFN).

The Inspector-General expressed the commitment of the SAF to work closely with the Nigerian military for mutual benefits.

Maj Gen Niang, while showering encomium on the AFN for its past exploits in global and regional peace support operations, revealed that the collaboration between both armed forces would further strengthen their fight against insurgency, terrorism and other forms of insecurity bedeviling the West African sub-region.

The visiting Senegalese delegation, who arrived Nigeria on 26 June, 2021 on a working tour of military establishments and institutions across the country, had earlier paid a courtesy call on the Honourable Minister of Defence, Maj Gen Bashir Magashi (rtd) and the Service Chiefs.

The Armed Forces of Nigeria (AFN) has indicated interest to collaborate with the Pakistan Armed Forces (PAF) in the area of defence capabilities to further boost its operations.
The Chief of Defence Staff (CDS), General Lucky Irabor, stated this when he hosted the Pakistan Chairman Joint Chiefs of Staff Committee (PCJCSC), General Nadeem Raza, in Abuja.

The CDS stated that the AFN under his watch would further strengthen the long existing strategic partnership with its Pakistani counterpart on human capacity building, acquisition of military platform and modern communication gadgets.
According to Gen Irabor, “Pakistan stands a good ground for us (AFN) to improve on our defence capabilities”

The CDS reiterated the commitment of the AFN towards partnering with both foreign and regional allies in order to build capacity of its personnel towards meeting the various security threats.

The Pakistani defence chief said he was in Nigeria to seek ways on how to further deepen the scope of the defence cooperation between Pakistan Armed Forces and its Nigerian counterpart.

Gen Raza added that AFN and PAF could also collaborate in the area of defence production capabilities which include manufacturing of armoured tanks, small arms and ammunition, communication equipment amongst others.

Gen Raza added that there was need for both Armed Forces to share their individual experiences in the fight against terrorism which according to him, Nigeria and Pakistan were faced with peculiar security challenges. He reiterated that the PAF will continue to support the AFN in all areas of endeavours aimed at surmounting insecurity.

You are kindly requested to disseminate this information to the public. Thank you for your support and cooperation.