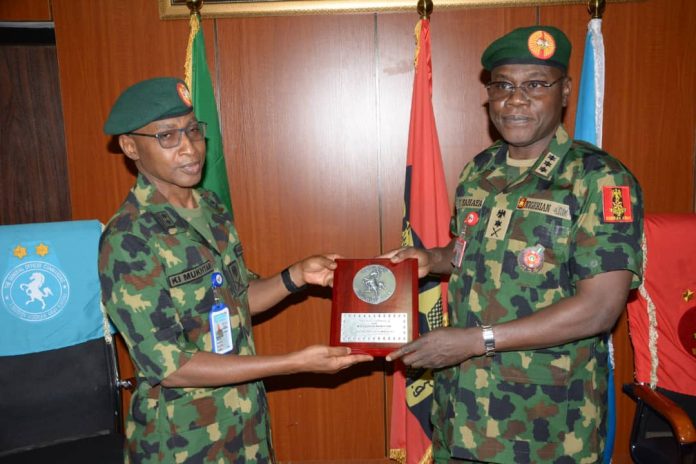 Troops of Operation HADIN KAI (OPHK) deployed at 192 Battalion Foward Operations Base (FOB) have inflicted heavy casualty on Boko Haram(BH) and Islamic State of West Africa Province (ISWAP) terrorists in an ambush in Pulka general area. It was an Intelligence driven operation that was conducted with precision in conjunction with members of the Civilian Joint Task Force (CJTF) and local vigilantes. The operation left four of the criminal elements neutralized and a good number of arms recovered.

The fierce encounter occured in Rengye, an area suspected to be the terrorists’ crossing point. Aside the neutralized terrorists, several others escaped with injuries, leaving traces of blood behind, as they fled in disarray.

While commending the troops for their resilience and renewed doggedness, the Chief of Army Staff, Lieutenant General Faruk Yahaya charged them to continue to dominate the area operationally by denying the criminals freedom of action.

General Yahaya, who was received and conducted round Forward Operational Bases Sabo Birnin and Rigassa by the General Officer Commanding (GOC), 1 Division, Maj Gen Kabiru Mukhtar, charged the troops to be ingenious in their training and operational engagements, to effectively tackle insecurity in their areas of responsibility.

Describing emerging security threats as real, the COAS directed the troops to decisively deal with bandits, kidnappers and other criminal elements threatening the security of the nation.

He Urged the troops to remain committed to ensuring security of lives and property of the citizenry, maintaining that it is crucial for officers and soldiers to always cultivate cordial civil-military relations with members of their host communities and the general public as critical stakeholders and catalyst for operational success.

The Army Chief however warned the troops against indulging in any act inimical to ongoing operations. He affirmed his resolve to promptly address cogent challenges confronting the troops in the execution of their tasks.

In furtherance of his commitment to empowering and enhancing the functionality of Regimental Sergeant Majors (RSM) of the NA, the Chief of Army Staff presented a brand new Toyota Hilux to the RSM of Headquarters 1 Division, Master Warrant Officer, Auwalu Taudo.

General Yahaya pointed out that the presentation of vehicles to RSMs is targeted at restoring the prestige associated with the office of the RSM as custodians.of regimentation and discipline in Nigerian Army, adding that RSMs play vital roles in grooming and shaping the regimental lives of young officers and soldiers.