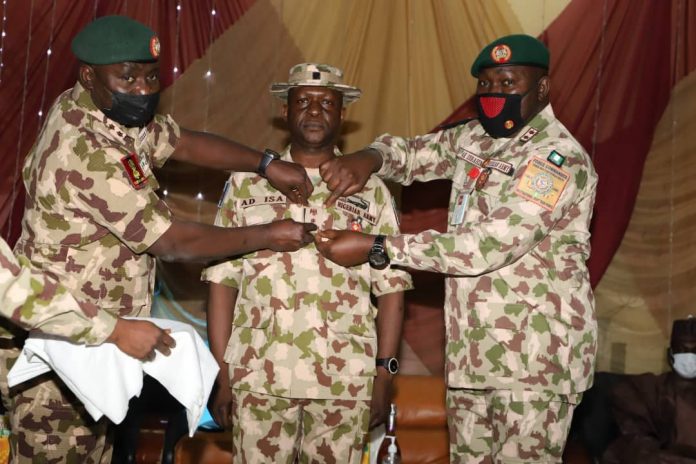 Brigadier Ado is among 22 senior officers of OPHK decorated with their new badges of rank after their recent promoted by the military council.

Born in Potiskum on January 10, 1968, brigadier General Isa was Commissioned as a Direct Regular Officer on 25 September 1993 as Lieutenant and deployed to the Directorate of Army Public Relations. He holds Bachelor of Science Degree in Sociology and Anthropology, Post Graduate Diploma in Public Relations, master’s in law enforcement and Criminal Justice, Certificate in Radio Production/Presentation and Certificate in UN Courses & others.

During the course of his Career, Col Isa travelled widely both within and outside the country, he bagged several honours and awards which includes: Forces Service Star, Meritorious Service Star, Distinguish Service Star, General Operations Medal and Member of the Nigeria Institute of Public Relations (MNIPR).

Speaking during the decorations of the newly promoted officers, Major General Christopher Musa charged to remain loyal to the President, Commander-in-Chief and the Constitution of the Federal Republic of Nigeria while discharging the duties in their new status as Generals in the Nigerian Army.
He expressed appreciation to the Chief of Army Staff and the Service Chiefs for their magnanimity and consideration to promote this very seasoned, dedicated and capable senior officers across the theatre as members of the Armed Forces. He added that the promotions would spur the senior officers to put in more efforts and restrategize on the fight against insurgency.

Also in his remarks, the Force Commander Multinational Joint Task Force (MNJTF), Major General Abdul Khalifa Ibrahim, while congratulating the officers said that a promotion in the military is a call to duty and responsibilities which demands more dexterity, determination, critical and logical thinking on issues of strategic and policy importance to military and the nation.

Officers decorated at the occasion included one Nigerian Captain to the rank of Commodore; 20 Colonels to the rank of Brigadier Generals as well as one Major to the rank of Lieutenant Colonel.
Dignitaries present at the occasion includes, the Deputy Theatre Commander 1 OPHK, Major General IM Jallo, Honorable Commissioners for Religious Affairs and that of Water Resources, Air Component Commander, Air Commodore Ananaba, Commander Sector 3, Brigadier General MG Mutkut, Commander 29 Task Brigade, Formations and Units Commanders, Heads of other Security Agencies, senior officers, families, friends and well wishers of the newly decorated officers. Others includes troops, members of the press and other invited guests.