A former governor of Jigawa state, Sule Lamido, his two sons Aminu and Mustapha and one Aminu Wada Abubakar are to remain in prison till September 28, 2015. The quartet were remanded in prison custody this morning by Justice Evelyn Anyadike of the Federal High Court sitting in Kano after they were docked on a 28-count charge of corruption and money laundering brought against them by the Economic and Financial Crimes Commission, EFCC.
They were arraigned alongside four companies where the Lamidos are believed to have interest. The companies are Bamaina Holdings Limited, Bamiana Company Nigeria Limited, Bamaina Aluminum Limited and Speeds International Limited.
Lamido is said to have abused his position as governor of Jigawa State between 2007 and 2015, by awarding contracts to companies where he has interest, using his two sons, Aminu and Mustapha as front.
One of the counts in the charge reads, ““That you Alhaji Sule Lamido ( while being the Governor of Jigawa State, Nigeria), Aminu Sule Lamido, Mustapha Sule Lamido, Bamaina Holdings Limited, Bamaina Company Nigeria Limited and Speeds International Limited between 15th October and 18th December, 2008 within the jurisdiction of this Honourable Court did convert an aggregate sum of N 124, 649, 915 ( One Hundred and Twenty Four Million, Six Hundred and Forty Nine Thousand, Nine Hundred and Fifteen Naira) paid by Dantata & Sawoe Limited into the account of Speeds International Limited domiciled with an old generation Bank at Kano which fund you reasonably ought to have known to be proceeds of an unlawful act of Alhaji Sule Lamido who was a Public Officer within the meaning of the Code of Conduct for Public Officers as prescribed under the Fifth Schedule of the Constitution of the Federal Republic of Nigeria, 1999 ( as amended ) to wit; engaging in private business by a public officer, using the said company in which he is a director and a shareholder, and to whose account he is a signatory; with the aim of concealing the illicit origin of the said sum and you thereby committed an offence punishable under Section 14 (A) of the Money Laundering Act, 2004.”
However when the charges were read to the accused persons they pleaded not guilty. Their counsel, Offiong Offiong, SAN told the court that he had filed application for bail and urged the court to consider granting the accused persons bail. But prosecuting counsel, Chile Okoroma, requested for time to respond to the application. He prayed the court to remand the accused persons in prison custody as the EFCC holding facilities in Abuja and Kano were already overstretched.
Justice Anyadike consequently remanded the accused persons in prison custody pending consideration of their bail application and adjourned to September 28, 2015.
The arraignment of Lamido and his children was not without incident as an unruly crowd of supporters loyal to the former governor threatened to disrupt the court session. It took reinforcement of the detachment of policemen at the court to maintain order.
The travails of the Lamidos began in 2012 when one of his sons, Aminu was arrested by Operatives of the EFCC at the Aminu Kano International Airport, Kano for failing to declare a sum of forty thousand United States Dollars ( $ 40,000). He was prosecuted and convicted; with 50 percent of the undeclared sum forfeited to the Federal Government. But the investigation into the source of the funds led investigators into the closely guarded web of corruption and money laundering involving members of the former first family of Jigawa state and their cronies. 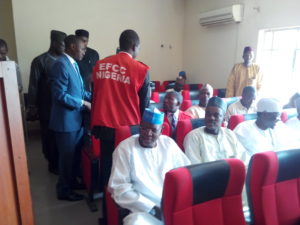 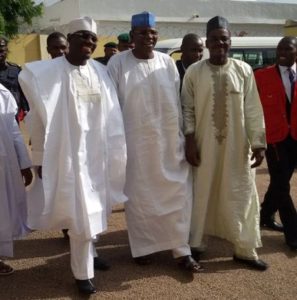