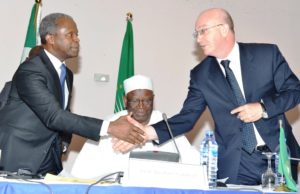 The Federal Government has commended the Peace and Security Council of the African Union for providing the continent with an effective mechanism and tool in conflict management.
The Vice President, Prof. Yemi Osinbajo, SAN, stated this today at the opening of a retreat for members of the AU Peace and Security Council and Regional Economic Communities (RECs) focusing on the Promotion of Peace, Security and Stability in Africa holding at the Sheraton Hotel and Towers in Abuja.
According to him, the Peace and Security Council ‘’has been a novel African initiatives in many respects, one that has proven an effective tool in conflict management’’. Speaking to an audience of Ambassadors and diplomats from several African countries, the Vice President added that the ‘’achievements of the Council in its 11 years of existence have set it out as an outstanding best practice, worthy of emulation by other regions in the world’’.
He said the Peace and Security Council ‘’has been AU’s lead response agency in tackling numerous conflicts and other security challenges in all respects, ranging from political crisis, armed conflicts to humanitarian crisis as exemplified in the Council’s handling of the recent Ebola Virus Disease in some of our countries.’’
Prof. Yemi Osinbajo also underscored the significance of the needed synergy between Regional Economic Communities (RECs) and the Peace Security Council (PSC), an organ of the African Union (AU), emphasizing that such cooperation is crucial for the African Union as a continental body. While stressing the importance of the synergy, he said ‘’the importance of the two having stronger coordination and synergy of functions can never be over-emphasized. Indeed, if the AU is to deliver on the goals set out in the Constitutive Act, closer cooperation and synergy with the RECs is one requirement that is absolutely imperative.’’
Addressing the participants at the retreat on the task before them , Prof. Osinbajo said ‘’I would like to remind you that attention should be focused  on how the PSC and the RECs can enhance effectiveness and efficiency using their comparative advantages and various capacities within the context of subsidiarity and complementarity in the areas of early warning and early action, conflict prevention, peace making, post-conflict peace building, reconstruction and development, strengthening of democratic practices and governance, as well as in combating terrorism and violent extremism.’’
‘’It is when all of these are comprehensively addressed that all the weak linkages and gaps that often pose the risk of parallel initiatives and contractions will be eliminated thereby achieving our delineated objectives under the APSA (African Peace and Security Architecture)’’, he submitted.
Prof. Osinbajo noted that ‘’today, almost on a monthly basis there is a fresh conflict situation, or a relapse of post-conflict situations. At the same time terrorism and violent extremism present fresh problems, including large numbers of IDPs and refugees going across the borders of neighbouring countries.”
The Chairman of the occasion and former Nigeria’s Foreign Affairs Minister, Prof. Ibrahim Gambari in his remarks implored the PSC to work towards enhancing cooperation with the Regional Economic Communities and the United Nations, emphasizing that there is a need for Africa to take its destiny in its own hand and to de-congest the UN Security Council agenda of African conflicts.
In his opening remarks, the Chairman of the AU Peace and Security Council, Ambassador Mull Katende disclosed that the retreat was being convened at a critical time in the history of the African continent, when it is confronted by persistent conflicts, eruption of fresh conflicts and relapses of some post-conflict situations. He however, expressed his gratitude to the Nigerian Government for hosting the retreat.
The Abuja retreat is a follow-up to one held in Namibia in May this year and it is intended to provide the ideal opportunity for African Ambassadors and diplomats to reflect on concrete measures for promoting a working culture that would ensure enhanced cooperation between the PSC and the RECs in the promotion of peace, security and stability in Africa.
Laolu Akande
Senior Special Assistant to the Vice President (Media & Publicity)