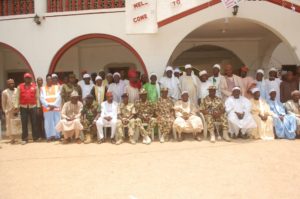 Traditional Rulers in Mubi Emirate Council and its environs have been   urged to cooperate and share information with the military component to enable the fight against insurgency succeed. The theatre Commander, Operation LAFIYA DOLE, Major General Yusha’u Mahmood Abubakar made the call yesterday when he paid a visit to the troops in the frontline operating in Adamawa State. The visit also took the Commander to the Headquarters 75 Strategic Tactical Group of the Nigerian Air Force where he was briefed on air operations of the Operation LAFIYA DOLE. The Commander later proceeded to the 28 Task Force Brigade, Mubi where he addressed the troops and presented the COAS goodwill message as well as commended the troops for the good work they are doing. He also attended an interactive session organized by the Department of Civil- Military Affairs for the civil society groups where books and other learning materials were presented for distribution to all schools in the area. Similarly, the tour also took General Abubakar to Gombi where he equally addressed the troops before returning to Yola and proceeded to the Internally Displaced Persons (IDP) camp behind Gibson Jalo Cantonment. The theatre Commander used the occasion to address the camp’s staff and urged them to be more dedicated and alert at all times. It should be noted that the visit was to enable the Commander synergise the efforts of the troops as well as their performance in the frontline. The Theatre Commander was accompanied during the visit by the Air Officer Commanding Tactical Air Command, Air Vice Marshal RA Ojuawo, Commander, 75 Strike Group, Air Commodore IO Amao and Commander 23 Brigade, Colonel ABA Popoola among others. You are please requested to disseminate this to the public through your medium.  Thank you. TUKUR ISMAIL GUSAUColonel Deputy Director Army Public Relations 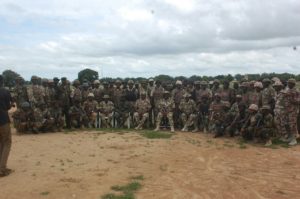