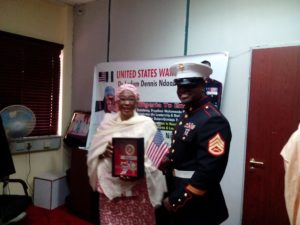 President Muhammadu Buhari has hailed the ‘can do’ spirit of the Nigerians in Diaspora, as he called for patriotism of all and sundry in order to make Nigeria a better place to be.
The President stated this while receiving a Presentation of Military Awards/Laurels from a Nigerian – born American, who is now a United States War Hero, Staff Sergeant Ledum Dennis Ndaanee on Thursday in Abuja.
Recieving The Awards on behalf of Mr President, the Permanent Secretary, Federal Ministry of Special Duties and Inter Governmental Affairs, Dr. Jamila Shu’ara, noted that the occasion was a celebration of the ‘can do spirit’ of the Nigerian who remained resolute and undaunted despite the numbers of challenges in the Diaspora.
She charged the Nigerian Youths to take a clue from the achievements of Sgt. Ledum, who as a US Marine Corp; a seasoned American War combatant and a proud Nigerian by birth has in recognition of his service, been conferred with six Medals/Laurels  – Good Conduct Medals; Purple Heart Combat Action Ribbon, Iraq Campaign Medal, Sea Service Deployment Ribbon, Global War on Terrorism Service Medal and National Defence Service Media.“This is the kind of patriotism Nigeria needs from our fledgling democracy” she stated.
Mr. President sought the support of the visiting War Hero and that of other Nigerians in the Diaspora in contributing useful ideals to Government in current battle against insurgency and also, in its effort at Nation Building.
In his remarks, Dr. Ledum, who was presented with the ‘‘Outstanding American by Choice” Award, which highlights the outstanding achievements of naturalized United States citizens in 2010 by President Barack Obama,  said it was really nice being home; saying he was a Nigeria by birth and he would never forget Nigeria.  “ This is where I am from, I will never forget Nigeria”.
Present at the event were the senior special assistant to President on Political Matters, Hon. Gideon Zamani who represented the Secretary to the Government of the Federation,  father of  the Hero, Mr. Jolly Ndaanee and other dignitaries.
Ozoya Imohimi
AD/Head, Press & Public Relations