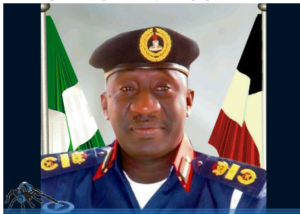 **Orders tighter security on critical infrastructures of govt.**Declares War Against Vandals
The Commandant General, Nigeria Security and Civil Defence Corps (NSCDC) has directed tightened security measures in all critical infrastructure of government to guard against the sort of incident that occurred in Konu, a border town between, Arepo, Ogun State and Ikorodu, Lagos State, where suspected pipeline vandals allegedly shot dead some operatives of the Department of State Security (DSS).
The pipeline vandals reportedly ambushed the operatives in what could be described as a ‘bloody encounter,”
The Commandant General Abdullahi Gana Muhammadu in a condolence message to DSS, which reads: “I learned with great sadness and shock the news of the killing of DSS operatives by suspected pipeline vandals. The NSCDC condemns, in the strongest possible terms, this criminal attack.
I would like to present my deep and heartfelt condolences to the families of the victims,  the Government and the Department of State Secuirty (DSS).
Abdullahi therefore declared war against vandals, warning them to steer clear of government infrastructure or face the full  weight of the consequences of their actions
This is contained in a statement by DC Emmanuel Okeh, Public Relation Officer of NSCDC and made available to the newsmen in Abuja.
It said the corps as a creation of government by an Act of Parliament was saddled with responsibility of protecting the Nations Critical Infrastructure and National Assets, The statement mentioned the critical infrastructure to include among others, protection of Petroleum Pipelines, Gas Installations, Telecommunication facilities, Transport facilities such as Rails,  roads, etc.‎
DC Emmanuel OkehPublic Relations Officer of NSCDC
PRNigeria encourages institutions to be transparent in their information management as it provides news items from authoritative sources for free use by the media