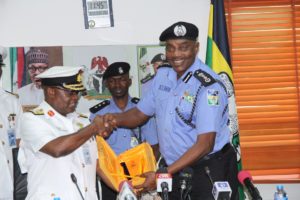 In what appears to be building a tight security on our maritime routes, the Chief of Naval Staff, Vice Admiral Ibok Ete-Ibas, GSS, AM, PSC+, NDC and the Inspector-General of Police, IGP Solomon E. Arase, fdc, NPM on September 23, 2015 met at the Force Headquarters, Abuja to form partnership in securing the sea ways of the nation.
In his message to the Inspector-General of Police, the Chief of Naval Staff said, he appreciates the existing cooperation between the Nigeria Police and the Nigerian Navy, saying, this synergy becomes imperative as both organizations are involved in the protection of lives and property on land and sea. He further requested for capacity building of officers and men of the two agencies on exchange programme, while soliciting for speedy prosecution of maritime cases.
Responding, the IGP told his visitor that he intends to re-brand the marine police so as to checkmate crimes at sea. He also said he was delighted at the visit of the Naval number one man, thanking him for the suggestions of assisting the Police in reducing piracy on our waterways. IGP Arase promised his Naval counterpart that the Nigeria Police will assist the Navy in training its officers in civil law relating to their duties as well as assisting the organization in whatever capacity the Nigeria Police can be of help.
Ag. ACP OLABISI KOLAWOLEFORCE PUBLIC RELATIONS OFFICER,FORCE HEADQUARTERS,ABUJA.
PRNigeria encourages institutions to be transparent in their information management as it provides news items from authoritative sources for free use by the media