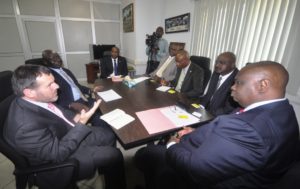 The Chairman, Economic and Financial Crimes Commission, EFCC, Ibrahim Lamorde, has debunked the allegation that suspects who are being investigated for alleged corrupt practices by the Commission are made to give their statements under duress.
He said the state- of-the- art recording facilities in the EFCC interrogation rooms would not allow any interrogator to humiliate a suspect.  Speaking in his office on Monday, October 19, 2015 during a visit by two officials of Amnesty International, AI, he said: ‘‘The EFCC follows the rule of law. Our statements are recorded and are not taken under duress. Our rooms have cameras in them, so it is not possible to humiliate anyone.” Lamorde, who expressed gratitude to the AI team for opening an office in Abuja, also described corruption as the worst type of human right abuse, adding that AI must continue to lend its voice to the anti-corruption war in Nigeria.  According to him, ‘‘Western countries must end the impoverization of developing countries. They must reject and return stolen funds, so that respective governments of the affected developing countries could use the money to better the lives of the poor in their countries. It is the common wealth of the people that has been diverted for private use. So, it is the worst form of human rights abuse. When corruption and impunity become the order of the day, human rights abuses flourish.
‘‘When you consider the cause of water-borne diseases suffered by people in rural areas, it is because someone has diverted the funds meant for pipe borne water in those areas. Also, when you consider the fact that our hospitals lack the basic amenities, it is because some people have kept the funds allocated to the hospitals to themselves. I, therefore, urge you to consider partnering with the EFCC,’’ he said. In his remark, Mr. Colm O Cuanachain,  Senior Director, Office of the Secretary General of Amnesty International, said that only nations that take anti-corruption war seriously could experience ‘‘phenomenal growth’’. Cuanachain, who further expressed the readiness of AI to partner EFCC, also talked about the activities of the AI in the North- Eastern part of Nigeria, the Niger Delta and Port Harcourt, Rivers State, where he said corruption had contributed to human rights violation.  He, however, decried death penalty as punishment for looters of the treasury, adding that ‘‘it is not the best option in the fight against corruption.’’ Also, in his  closing remark, Executive Director, Amnesty International Nigeria, M.K. Ibrahim, emphasized the need for the masses to be educated on the effects of corruption and human rights violations.
Wilson Uwujaren
Head, Media & Publicity19th October, 2015
PRNigeria encourages institutions to be transparent in their information management as it provides news items from authoritative sources for free use by the media 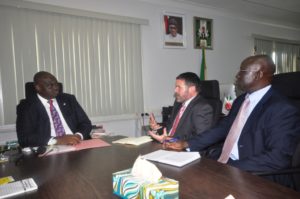