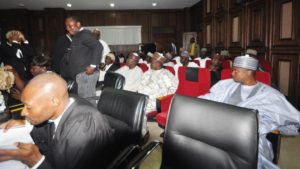 The trial of Alhaji Sule Lamido, former Jigawa governor, who is being prosecuted on a 27-count charge alongside his two sons Aminu Sule Lamido and Mustapha Sule Lamido and two others by the Economic and Financial Crimes Commission, EFCC, began on Wednesday, October 21, 2015 before Justice Adeniyi Ademola of the Federal High Court sitting in Abuja, with the EFCC presenting four witnesses.
The witnesses who testified as PW1, PW2, PW3 and PW4 respectively are, Longji Tupkop, a relationship manager with United Bank of Africa, UBA; Kabir Mashi, regional manager, Unity Bank Plc, Kano North; Mustapha Baba and Onyiche Agbaghara of Unity Bank Plc and Keystone Bank.Tupkop while being led in evidence by prosecuting counsel, Chile Okoroma, stated that, he was in court to present account statements for one of the bank’s customers: Dantata and Sawoe Construction Company.
Explaining some of the transactions that were reflected on the documents between April 23 and 26, 2013, Tupkop told the court that, “the first entry on the 23rd of April 2013 was a clearing cheque of over N7m (seven million) in favour of Bamaina Holdings Limited, another cheque of over N7m (seven million naira) in favour of Speeds International Limited and yet another cheque of over N7m in favour of Gada Construction.
According to him, the cheques were returned on the 23rd because they were not confirmed.
“The same sets of cheques were however paid to all the three companies on the 26th of April 2013”, Tupkop stated.The documents of the account opening package of Dantata and Sawoe were tendered and admitted as exhibits.
Also testifying, Mashi, PW2, told the court that, his bank was subpoenaed and that, he was in court to tender the statement of account and account opening packages of Speeds International Limited, Bamaina Holdings Limited and Alhaji Sule Lamido.However, the admissibility of the document was contested by Joe Agbi, SAN.In his argument, the subpoena was specific about which documents to bring.According to him, Mashi only brought the application for the reactivation of the account which presupposes that an account already existed.
“The witness is a ‘special witness’ subpoenaed by the court to bring certain documents and since all court orders must be obeyed, the witness must bring the particular documents he was asked to bring”, argued AgbiHe prayed the court to discountenance the documents.Responding, Okoroma opined that the document is admissible based on its relevance saying, “relevance governs admissibility”.He urged the court to overrule the objection of the defence.
Justice Ademola, admitted the documents in evidence saying it was relevant and admissible.
PW3, Baba, presented the account opening package of Alhaji Sule Lamido,  while Agbaghara, PW4, presented the statement of account and account opening package of Dantata and Sawoe Construction Company.The documents were admitted in evidence.
Justice Ademola adjourned the case to November 24 and 25 for further hearing.Lamido allegedly abused his position as governor between 2007 and 2015, by awarding contracts to companies where he had interest, using his two sons as front.
The former governor was equally alleged to have collected kickbacks from contractors in the state, with the funds allegedly paid into accounts that were managed by his sons.
Wilson UwujarenHead, Media & Publicity22nd October, 2015
PRNigeria encourages institutions to be transparent in their information management as it provides news items from authoritative sources for free use by the media