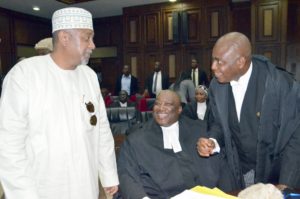 A Federal High Court sitting in Abuja on Monday set Tuesday, November 3, 2015 for ruling on applications for the release of the passport of Col. Sambo Dasuki’s (rtd) to enable him travel abroad for medical treatment. Meanwhile the court ruling on an application by federal government for a Secret Trial of the immediate past National Security Adviser (NSA) is still being awaited.
Dasuki is standing trial on a five count charge bothering on illegal possession of firearms and possession of amounts of local and foreign currency in his residence contrary to Money Laundering Act.
The former NSA was first charged on Monday August 24, 2015 on a one count charge of illegal possession of firearms.
He was immediately granted bail on self recognition while the trial judge Adeniyi Ademola ordered the Department of State Security Services to submit Dasuki’s passport which it had seized with the court registrar.
On October 26 when the case was supposed to be heard, prosecution filed four fresh charges and also asked for a secret trial to protect witnesses even though all the names of witnesses had been mentioned in the court processes.
On the same day, Dasuki asked the court for the release of his travel passport to enable him attend to his personal health issues abroad and objected to the Secret Trial, preferring  open trial of the case for the benefit of the public.
Justice Adeniyi Ademola of Federal High Court 6 then adjourned the case to Wednesday last week for ruling on the two issues being sought by both prosecution and defence but the court failed to sit on that day because of a seminar organised for judges by the National Judicial Institute (NJI).
At the resumed hearing of the case this Monday however, Justice Ademola revealed that Dasuki had filed an application for urgency to hear the motion for release of his passport as the date of appointment given by his medical doctor had since elapsed.
Counsel for Dasuki, Mr. Joseph Dawodu (SAN) said Dasuki needed his passport to honour a pending medical appointment and urged the judge to direct the Registrar of the court to release the passport.
Objecting to the application, Mr. Muhammed Diri, Federal Director of Public Prosecution (DPP) argued that seizing Dasuki’s passport was the only condition upon which he was granted bail and that it has been discovered that the ailment of the accused could be treated at the National Hospital, Abuja.
Again reacting to Diri, Dawodu argued that refusal to release the passport would be tantamount to punishing Dasuki and it would also appear as if he had already been sentenced “whereas it is only to secure his appearance.”
Dawodu also argued that the bail condition granted Dasuki was on self-recognition. He also cited various legal authorities to back his argument.
Justice Ademola, while deferring his ruling on the matter till Tuesday then asked Diri to present any legal authority to support his opposition to the request.
By PRNigeria
Caption of attached picture:
L  R Former,National Security Adviser to president,Col. Sambo Dasuki, his Counsel Ahmed Raji ( SAN )and lead Counsel to Sambo Dasuki,Joseph Daudu (SAN), at the Federal High Court in Abuja
PRNigeria encourages institutions to be transparent in their information management as it provides news items from authoritative sources for free use by the media