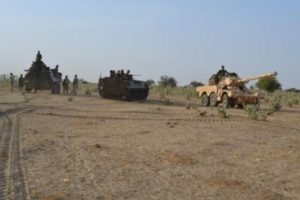 The Nigerian Army has commenced strikes deep inside Sambisa forest which is believed to be the remaining strong point of the Boko Haram terrorists.
Various units of the Army have advanced deep into the forest clearing most of the camps therein,  rescuing persons held captive, arresting some terrorists and destroying most of their weapons and equipment.
Advancing troops of the Nigerian Army, supported by the Nigerian Air Force were able to clear  and destroy Boko Haram terrorists camps at Shuari, Adembe,  Yerimari  Kura,  Yerimari  Gana, Gonin Kurmi, Kore, Mainya Kore, and Lopere. Additionally,  the Multi-barrel Rocket Launcher Regiment has destroyed the terrorists camps at Dure, Dure Kore, Jokwa, as well as several other camps.
The troops recovered foodstuffs, motorcycles, flags, Improvised Explosive Making Devices (IED) materials and military uniforms. Among other discoveries were the terrorists tunnels, weapons and equipment.  The soldiers also recovered 2,000 cows rustled from various persons over time and rescued women and children held captives by the Boko Haram. While the animals have been moved to Kanwuri,  the rescued persons have been evacuated and are being given all the necessary support and assistance.
During the encounter with the terrorists at Yerimari Gana a number of Boko Haram terrorists were killed and some suspected terrorists were arrested who are being interrogated. However,  a soldier sustained gun shot wound and fracture on the leg.
Similarly, while advancing to destroy Nefari terrorists camp, troops discovered and cleared 3 IEDs laid along the route. The camp was successfully cleared and troops have continued their advance while a blocking force has been deployed to prevent infiltration and possible escape by the terrorists.
Unfortunately during another encounter with the terrorists along the axis of advance,  3 soldiers made the supreme sacrifice, while an officer and 2 soldiers were wounded in action.
It is instructive to note that the troops morale is very high and being conscious of their set objective, they are unrelenting in their determination to defeat the Boko Haram terrorists.
In a related development, troops have also destroyed Boko Haram terrorists camps Bulagaije and Disa, Gwoza Local Government Area, Borno State and recovered motorcycles, Dane guns and ammunitions.
Kindly disseminate this information and the attached photographs to the public through your medium.
Thank you for your kind support and cooperation.
Colonel Sani Kukasheka Usman
Acting Director Army Public Relations
PRNigeria encourages institutions to be transparent in their information management as it provides news items from authoritative sources for free use by the media