Home Features Opinion: December Deadline and A Trip to Maiduguri 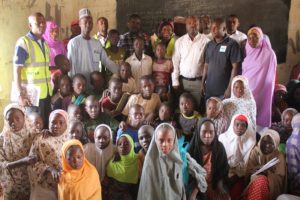 It was neither a vacation trip nor a tour for seasonal ceremony.  It was a journey to attend a crisis communication seminar for humanitarian workers and journalists covering disasters which was held in Maiduguri in the first week of December 2015.

My family members could not dissuade me from the trip that hopefully would provide me another opportunity to assess one of the Boko Haram worst-hit cities in Nigeria.

The flight was smooth from Abuja to Maiduguri but I was glued to the window to see if I would sight soldiers and terrorists engaging in shoot-out… At the same time, the dreadful feeling that Boko Haram members could shoot down our aircraft with their home manufactured rockets lurked in a corner of the mind.

Driving into the town, it was easy to observe that the city wasn’t bubbling as most roads were deserted, exotic mansions abandoned and fine hotels had low patronage even with their generous discounts on accommodation.

I used the opportunity of the seminar to interact with some of the highly patriotic and exceptional Nigerian journalists who have been covering the war on terror with great responsibility. For the national interest, they have observed self-censorship against sensational reporting.

On a visit to the Internally Displaced People (IDP) camps, the sights of orphans and widows were quite disturbing even though NEMA and other stakeholders are taking good care of them.

Passing through security check-points, the sacrifice of Nigerian troops, especially young soldiers in their zeal and determination to defeat Boko Haram terrorists was obvious from their faces. While some of them are bachelors with parents, others are married with children they left at home to defend Nigeria.

Immediately after the directive, the National Security Adviser (NSA), Major General Babagana Monguno led service and security chiefs to the frontline to seek the cooperation of community leaders, traditional rulers and pressure groups to support the new drive against war on terror. He also visited and commiserated with IDPs and reassured them that the war would soon be over.

The Chief of Army Staff, General Tukur Buratai has not led from the back, he was in the warfront by actively participating in some of the operations where terrorists were either captured or killed. He has so far spent most of his time on the battle field. The Chief of Air Staff, Air Mashall Sadique Abubakar has personally commanded fighter jets in the war on terror to motivate fighter-pilots into putting in their best.

The Chief of Defence Staff, General Gabriel Olonisakin has ensured effective coordination and cohesion in the operation so far through mechanism of inter-agency collaboration, even as the Chief Naval Staff, Rear Admiral Ibok-Ete Ekwe Ibas has also confirmed that Special Forces from the Navy are actively involved in the operation.

The military has so far destroyed dozens of Boko Haram camps and freed more than 1,000 kidnap victims since inauguration of President Buhari. Nevertheless, there is the fear that the military may not be able to end Boko Haram by the deadline. The Executive Secretary of Centre for Crisis Communication (CCC), Air Commodore Anas recently disclosed that there is nothing wrong in imposing targets on the military but due to the asymmetric warfare which Boko Haram is prosecuting against civilian “soft targets” the December deadline is unrealistic.

There are also worrisome reports of fresh kidnap of dozens of girls and burning of buildings in Bam Village of Yobe State; reported missing and fleeing soldiers in Galtumari town in Borno State; destruction of military base in Gulak, Adamawa and media allegations that terrorists snatched military trucks, artillery guns that were bought by the previous administration.

During private conversations with stakeholders, many expressed beliefs that concerted efforts are required through credible intelligence to address the insecurity in the North-East.

Beyond ‘body languages’ theory and political grandstanding, others were of the opinion that some tougher actions taken by the past administration could be deployed in curtailing the excesses of terrorists. For instance, a journalist observed that even though many doubted the sincerity of the former National Security Adviser, Sambo Dasuki when he sought and obtained approval for postponement of 2015 general election to enable the military to degrade Boko Haram and ensure maximum security of voters, all known terrorists’ camps were destroyed before the emergence of new government on May 29; Sambisa Forest was stormed by “Special ‘M’ forces” and about 300 kidnapped women and children were freed; 22 terrorist occupied towns in three states were recovered; and Boko Haram could not disrupt the elections.

It is public knowledge that some of the towns recovered from terrorists during the administration of Goodluck Jonathan include Abadam, Askira, Baga, Bama, Biu, Damboa, Gwoza, Hong, Konduga, Kukawa, Marte, Madagali, Michika, Monguno, Mubi, and others.  In fact an official statement by the Defence Headquarters on March 16, 2015, with reference no: DHQ/ABJ/901/32/DDI announced the routing of terrorists from Bama after massive casualty was inflicted on the terrorists before the remnant fled. The statement further stated that the Chadian partners in the MNJTF were mandated to pursue the terrorists who were heading for the borders after being dislodged from Bama. Gujba, Gulani, Goniri, Buni Yadi were all retaken by Nigerian troops within the month, the statement concluded. It seems Nigerians have forgotten all these.

If the military failed to meet the December deadline, we shouldn’t blame the previous administration of Jonathan or the current government of Buhari but should encourage the military to improve the tempo. Afterall, the Nigerian troops have succeeded in the past and are succeeding now. We should therefore avoid taking actions that would rubbish the integrity of critical institutions including security and the media.