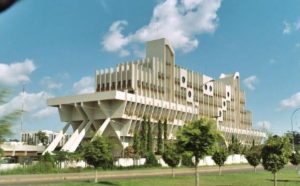 The Hon. Minister of Defence, Alh. Mansur Muhammad Dan-Ali has emphasized that the welfare of both military and civilian staff is his top most priority in the ministry.

The minister stated this during the decoration ceremony of three Military Officers working in his office.

The promoted officers are Cols MS Ahmed and NA Gobo Abraham promoted to the rank of Brigadier Generals and Major Abubakar Gusau, promoted Lt Col Brigadier Ahmed was admitted into the Nigerian Defence Academy, Kaduna in 1990 and was commissioned 2nd Lieutenant in 1992, Lieutenant 1993, Captain 1995, Major 2000, Lieutenant Colonel 2005 and Brigadier General in 2015. The Brigadier is from Shanono Local Government Area of Kano State and is married to Dr. Hafsat Abdullahi. They have five children.

Brigadier NA Gobo Abraham was commissioned into the Nigerian Army in 1989 and rose to the enviable rank of Brigadier General in 2015. The senior officer is married and has a child.

Lt Col Abubakar hails from Gusau Local Government Area of Zamfara State and was commissioned Lieutenant into the Nigerian Army in 2001, promoted Captain in 2005. Major in 2010 and Lieutenant Colonel in 2015. He is married to Hajiya Nafisa Ahmed Abubakar and they have two children.

In a remark, the Permanent Secretary, Amb. Danjuma Nanpon Sheni congratulated the officers and charged them to be committed to their duties, adding that unto those much is given, much is expected.