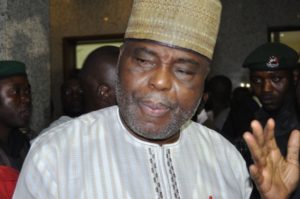 High Chief Raymond Dokpesi, the erstwhile Chairman, DAAR Communications Plc, on Thursday, December 10, 2015 failed in his bid to regain freedom after being docked on Wednesday on a six-count charge bordering on alleged procurement fraud and breach of public trust to the tune of N2.1 billion before Justice Gabriel Kolawole of the Federal High Court sitting in Abuja by the Economic and Financial Crimes Commission, EFCC.
Dokpesi is facing prosecution by the anti graft agency for allegedly receiving the sum of N2.billion from the office of the National Security Adviser, NSA, for PDP’s presidential media campaign.
The money was allegedly disbursed from funds earmarked for the procurement of arms for the fight of insurgency.
He was arraigned alongside his firm, DAAR Investment and Holdings Limited, owners of African Independent Television, AIT and Raypower FM.
The funds which were allegedly released to the accused persons between October, 2014 and March 19, 2015 were allegedly transferred from an account the office of the NSA operated with the Central Bank of Nigeria, CBN , to a First Bank  of Nigeria Plc account owned by DAAR Investment and Holding Company Limited.
The offence was a breach of Section 58 (4) (b) of the Public Procurement Act 2007 and punishable under Section 58 (6) and (7) of the same Act, as well as under Section 17 (b) of the EFCC Act, 2004.
One of the counts reads:
“That you Dr. Raymond Dokpesi and Daar Investment and Holding Company Limited between October 2014 and March 19, 2015 in Abuja, conducted procurement fraud by means of fraudulent and corrupt act, to wit: receipt of payment into the account of Daar Investment and Holding Company Limited with First Bank of Nigeria Plc of public funds in the sum of N2,120,000,000 from the account of the office of National Security Adviser (NSA) with the Central Bank of Nigeria for the funding of media activities for the 2015 presidential election campaign for the Peoples Democratic Party (PDP) and you thereby committed an offence contrary to section 58 (4) (b) of the Public Procurement Act, 2007 and punishable under Section 58 (6) & (7) of the same Act”.
The accused pleaded not guilty to all the counts preferred against him, and efforts of his counsel, Mike Ozekhome, SAN, to secure his bail was countered by the prosecuting counsel, Rotimi Jacobs, SAN, on the ground that, the application was served on him shortly before the court started sitting.
He urged the court to allow him time to respond.
The court in the circumstance, adjourned till today for hearing on the bail application.
While moving the application at the resumed sitting, Ozekhome, SAN, prayed the court to grant the accused bail saying, “the applicant has not contributed to the insurgency by his act and the only reason he is held in custody is because of mere speculation of future investigation which this honourable court cannot act on”.
He told the court that, the applicant is billed to travel abroad for medicals as can be proven in exhibits A3, A4 and A5 tendered in their affidavit.
The counsel argued that, the alleged offence is bailable adding that, the accused would not jump bail as he had families and dependants.
Jacobs, SAN, however drew the court’s attention to the seriousness of the offence. “The nature of the offence is corruption and a serious one,” he stated.
Jacobs explained that the exhibits tendered by the defence which includes a doctor’s appointment letter, hotel reservation and flight tickets, were arranged while the defendant was already in custody.
He further told the court that, “the accused initially denied having any transaction with the office of the NSA until he was confronted with the evidence. Therefore, such person cannot be granted bail as this is coming when the country is trying to change its corruption rating in the international community”.
He urged the court to refuse the application and remand the accused in custody.
Justice Kolawole after listening to the submissions of both counsel, adjourned till Monday, December 14, 2015 for ruling on the bail application and ordered the accused be remanded in EFCC custody.
Wilson Uwujaren
Head, Media & Publicity