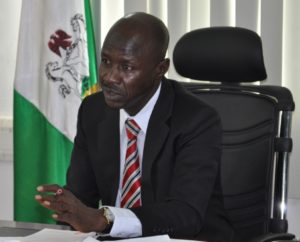 The Acting Chairman of the Economic and Financial Crimes Commission, EFCC, Ibrahim Magu has said that more influential people will be arrested soon.
According to him, “more influential Nigerians are on the radar of the EFCC and, in the coming weeks, they would have their days in court and Nigerians will be kept fully abreast of the results of the Commission’s investigations”.
Mr. Magu made this assertion in Abuja on Wednesday, January 6, 2016 at a meeting with online media practitioners and broadcast media managers.
He stated that the essence of the meeting was to solicit media support and understanding to deepen the fight against fraud, corruption and economic crimes. He asked for advice and suggestions in effectively propagating the war against graft.
“Apart from bringing corrupt public officers to justice, we are determined, in line with the stance of the current administration, to send an unmistakable message to everyone, that no Nigerian shall be regarded as being above the law or treated as a sacred cow as far as the fight against corruption is concerned.
“The EFCC needs you; Nigeria needs your critical support if we are to make any headway in this important campaign against corruption. My plea for your support is underscored by my understanding that the forces which we are battling are powerful and some of them may want to use all platforms of the media to distract and derail us. If and when they come to you, please allow the ethics of your profession, your conscience and overriding national interest to be your guide”, Magu said.
The EFCC boss explained that he has re-ordered the priorities of the EFCC and he finds inspiration in the unbending will of the President to fight corruption
He added that the judiciary has responded with some practical steps in the form of the designation of selected courts to try EFCC cases.
When asked about the perceived unbalance nature of the arrests made so far, Magu responded by saying “Such accusations have come up a lot, but we work with petitions before us. In fact, I am eager and waiting for something from the other side, but nothing has come so far,” he said.
Wilson Uwujaren
Head, Media & Publicity
6th January, 2016
—
PRNigeria encourages institutions to be transparent in their information management as it provides news items from authoritative sources for free use by the media