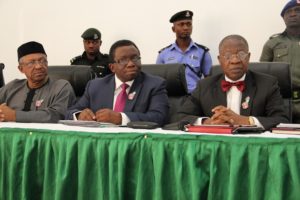 Federal Government has set up four-man committee to visit the most affected states by Lassa Fever epidemic and assess the current situation with a view to proffer recommendations against future occurrences. The Minister of Health Prof. Isaac Adewole made this known today Tuesday 11th January 2016 in a joint World press briefing with the Minister of Information and Culture Alh. Lai Muhammed in Abuja.The Minister said “In the last 48-hours the Government has raised a 4-man expert committee headed by Professor Michael Asuzu (a professor of Community Medicine and the current President of Society of Public Health Practitioners of Nigeria) to visit Niger, Kano and Bauchi, which were the 3 most affected states by the outbreak in the country.”“The committee would embark on a fact-finding mission, assess the current situation, document response experiences, identify gaps and proffer recommendations on how to prevent future occurrences,” he said.The committee according to the minister was not to apportion blame to anybody or state but rather to document lessons learnt for better planning purposes and for a more effective response in the future.Speaking on the current status, the Minister said “in the press briefing of Friday 8th January 2016 we mentioned that there were 86 suspected cases, 22 laboratory confirmed cases and 40 deaths with case fatality of 46.5%”However, “as of today, records from our surveillance team showed that the number of suspected cases is 93, number of laboratory confirmed cases is 25 and the number of reported deaths is 41 with a case fatality rate of 44.0%” Prof. Adewale who said that there have been no new confirmed cases or deaths in the last 48- hours, also urged the general public to maintain heightened vigilance and sustain preventive measures and practices.Earlier, the Hon. Minister of Information and Culture Alh lai Muhammad said that rationale behind World Press Conference was to update the World and Nigerians in particular on the current status of the Lassa Fever outbreak in Nigeria.He commended the media for the effort made so far in publishing the Federal Government efforts in preventing further outbreak of the disease. He appealed to the media to continue reporting the preventive measures the Federal Government is taking in controlling the disease.Boade Akinola Director Press, FMOH

On Bolstering Military Potential Against Insecurity