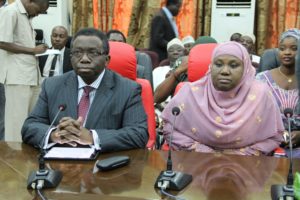 The Honorable Minister of Health, Prof. Isaac Adewole has said that the Federal Government would strengthen Lassa fever alert system for effective monitoring of the disease in the country. The Minister made this known on Wednesday 13th January, 2016, in Minna, Niger State during a courtesy call on the Executive Governor of State, ALHAJI ABUBAKAR BELLO. Professor Adewole noted that it was failure of the notification system that made it impossible for the Ministry to response promptly to the situation in Niger state, reiterating that the federal government’s mission and mandate in the health sector was to keep every Nigerian safe.Professor Isaac Adewole however advised that all hands should be on deck to sustain the current status of the disease by ensuring that the Federal Ministry of health is immediately notified of any strange death or disease, because, ‘every life counts and every death also counts’.The Minister also urged the general public to avoid contact with rodents/rats as well as food/objects contaminated with rats’ secretions/excretions. “Avoid drying food in the open and along the roadside. It is also important to cover all food to prevent rodents’ contamination, all suspected cases should be reported immediately to enable early treatment” Prof. Adewole said.He emphasized that since the outbreak of the disease this year, the fatality rate in the country had so far remained at 44%. The Minister then reassured that there was no person-to-person or hospital acquired infection recorded except the case in Plateau state. This, he said was good news.He pointed out that the ministry would support all States and local Governments in the training of health workers in the affected states, adding that there was need for further investigation of all the reported cases. He also advised that patients with high fever should not be allowed to leave their states.In his response, Governor Sani Bello who was represented by his deputy, Alhaji Ahmed Ketso called for incorporation of traditional healthcare healers into the National Primary Health Care delivery system due largely to their being the closest to the people particularly in rural areas. In his remarks, Niger State Commissioner for Health and Health Services, Dr. Mustapha Jibril explained that, despite the delay in notification and unwillingness of the people to give information, the state government swung into action with the support of the Federal Government, World Health Organisation (WHO) and other relevant agencies to nip the disease in the bud. After being briefed about the deaths recorded at Fuka ward, Muyan Local Government Area of Niger state when he visited the area, the Minister said, “So far things are under control in areas visited but I will advised the state and local government councils where deaths were recorded in Niger state to put an alert system in place to enable us track new cases whenever it happens”. Boade Akinola (Mrs)Director of press,For: Hon. Minister

On Bolstering Military Potential Against Insecurity