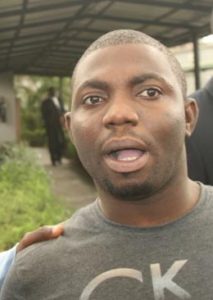 Justice Lateefa Okunnu of the Lagos State High Court, sitting in Ikeja  has convicted and sentenced  an undergraduate of  Kuala Lumpur Metropolitan University, Malaysia: Hope Olusegun Aroke to twenty-four years imprisonment for his involvement in an internet scam that fetched him Four Thousand riaait ( N25,000,000).
Aroke, 25, was arraigned before Justice Okunnu on a two-count charge bordering on obtaining money by false pretence; cheque cloning, wire transfer and forgery. The court found him guilty of the two charges and was sentenced to twelve years imprisonment on each of the two counts.
Troubles came for Aroke when an anonymous petitioner wrote to the EFCC alleging that the Kogi state-born undergraduate was involved in sundry fraudulent activities on the internet. The EFCC swung into action and investigated the internet dealings of Aroke.
Investigations showed that he was involved in several romance scam that fetched him a total sum of 4,000 riaait( Malaysian currency). Aroke admitted sending the money to Nigeria through one Angela, who later helped him deposit its naira equivalent, N25, 000,00( Twenty-five million Naira only), in a new generation bank.
Upon his arrest, two exotic cars valued at N23,000,000( Twenty-three million naira) were recovered from him.
Justice Okunnu ruled that the sentence should run concurrently. Meanwhile, Aroke has two other matters yet undecided before Justice B. Idris of the Federal High Court Lagos.
Wilson Uwujaren
Head, Media & Publicity
25 th January, 2016
Please find attached pictures of  convicted Hope Olusegun Aroke
PRNigeria encourages institutions to be transparent in their information management as it provides news items from authoritative sources for free use by the media