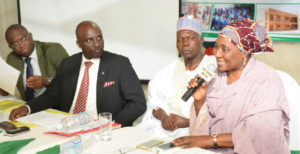 The Federal Government has initiated various Social Safety Net Initiatives such as school feeding and safe school project, as part of its Human Capital Development programme. The Minister of Education, Malam Adamu Adamu disclosed this at a 3-day implementation status meeting of 2015 MDGs Projects and Programmes held in Abuja from 25th – 27th January, 2016.
Stressing the pivotal role education plays in the attainment of economic growth and development, the Minister said that the Millennium Development Goals (MDGs) was a broad ideal of the International Community to reduce hunger, poverty, disease, gender inequality and lack of basic infrastructure.
“We all know that education is an essential tool for achieving sustainable economic growth and development. Indeed, no country can achieve sustainable  economic growth without development of human resources,” he said, urging the 2015 MDGs Beneficiaries in the Education sector to be transparent and resourceful in the implementation of outstanding projects and programmes that would promote development and  peace.
Malam Adamu, who was represented at the occasion by the Director of Tertiary Education, Mrs. Hindatu Abdullahi, disclosed that Nigerian Government, along with other nations of the world recently endorsed the Post 2015 Development Agenda at the 7th Session of the United Nations General Assembly held in New York. To key into the implementation process in the Education sector, the Minister said that the Ministry is planning to organize a high level sensitization meeting with critical stakeholders.
He observed that the End Point Report on MDGs’ Achievement showed appreciable progress Nigeria made, particularly in the areas of universal access to education and gender equality. But noted that this positive trend has been disrupted by the activities of Boko Haram attacks on many schools, leaving a large number of the internally displaced school children population.
The Minister, however, acknowledged the effort of this present government in addressing the challenges of Boko Haram insurgency, and said that the Federal Ministry of Education will continue to provide the enabling policies that will check insecurity in our schools. Also, he called on Principals of Unity Colleges to work collectively to alleviate the challenges of internally displaced school children.
In a remark, the Minister of State for Education, Prof. Anthony Anwukah, urged stakeholders in the Education sector to gear-up to the implementation of the Sustainable Development Goals (SDGs).
Represented by Prof. Godswill Obioma, he said that education is given prominence in the SDGs, therefore stakeholders in the sector should ensure that their projects/programmes add value to human capital development initiatives of government.
The Permanent Secretary, Dr. Folasade Yemi-Esan, in a welcome address, said that the aim of the meeting was to afford the 2015 MDGs Beneficiaries the opportunity to present the status of projects/programmes implementation.
The Permanent Secretary represented by the Director of Educational Planning, Research and Development (EPRD), Dr. Ebenezer Adeola, urged the beneficiaries to complete all their MDGs projects by March 2016, saying that the present administration will not tolerate any abandoned project.
Timothy Akpoili
For: Director (Press)