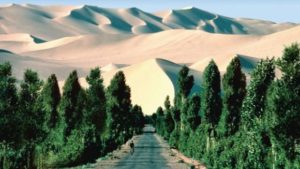 Plans are in top gear by the Federal Government to green Nigeria and mitigate the Environmental Impact caused by global warming and desertification.
This was disclosed Thursday 25th January, 2016 by the Minister of Environment, Mrs. Amina Mohammed when the Republic of Korea Ambassador, Mr. Noh Kyu-duk paid her a courtesy call in her Mabushi office, Abuja.
Speaking, the Minister stated that by transiting to green economy, the Federal Government intends to create an enabling environment for more inclusive growth while protecting the environment harzards.
“The transition to a green economy will benefit the country through increased sustainable development, poverty reduction, job creation and environmental conservation amongst other benefits”.
According to her, greening Nigeria will also give rise to increased renewable energy in line with the nation’s Renewable Energy Master Plan (REMP) which seeks to account for 10% of Nigerian total energy consumption by 2025.
“Investing in renewable energy will promote infrastructural development as energy will become readily available and more efficient’.
She further noted that all over the world, countries are making greener efforts and Nigeria as the giant of Africa and blessed with a practical President as Mohammadu Buhari cannot afford to be indifferent, hence the ministry will readily collaborate with countries such as the Republic of Korea who have vast experience and operate a green economy.
She also said that the Federal Government was willing to partner with other foreign investors in environmental sustainability.
Earlier in his remarks, His Excellency Noh Kyu-duk had said he was in the Environment Ministry to seek areas of collaboration between the Federal Government and the government of his country.
The Ambassador noted that going green has enormously helped his country’s economy and stated that with the Republic of Korea’s  experience in greening, the country was in good standing to support Nigeria in that area.
He further noted since establishing bilateral relations with Nigeria both countries have continued to foster strong political and economic ties.
Ovuakporie Efe
For: DD (Press)
Efe Ovuakporie Federal Ministry of Environment