Home Government Ministry Of Niger Delta Will Complete All Projects 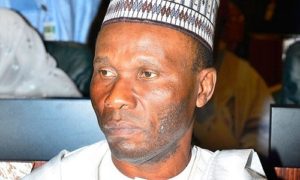 The Minister of Niger Delta Affairs, Pastor Usani Uguru Usani, has reiterated that the Ministry has not and will not abandon any of its on-going projects in the nine oil producing states of the Niger Delta.
The Minister said this when the leadership of the Association of Community Leaders of the Nine Oil Producing States paid a courtesy visit on him on Monday. He said that the Ministry was set – up to fast-track the development of the Niger Delta Region and would not abandon any of its projects.
“Contractors who appear to have abandoned their projects are advised to go back to site to complete them. If they have found themselves incompetent to deliver, Government should be made to know on time in order to re-award the contract to a more competent company”, he stressed.
The Minister also urged the people of Niger Delta not to complicate the current environmental challenge of the region by engaging in vandalising oil and gas pipelines which cause oil spillage and pollution.
On oil companies that cause spillage, the Minister warned: “The government will compel oil spilling organizations to do the necessary clean up because the government is on the side of the people to checking oil spillage”.
Also speaking during the courtesy call, the Permanent Secretary in the Ministry of Niger Delta Affairs, Belema Wakama, said the meeting was timely as   oil installations were being destroyed in the Niger Delta region; Mrs. Wakama charged the visitors to encourage the youths in the various communities to desist from all acts of destruction.
She reiterated that the various projects and programmes of the Ministry of Niger Delta Affairs were for the development of the region and its people, so the youths should protect Oil and Gas pipelines instead of destroying them.In his remarks, the National Chairman of the Association of Community Leaders in the Nine Oil Producing States, Mr.Ishmael Frank Oputu, stated that it was obvious that the Minister was concerned about the issues affecting the oil producing communities in the Niger Delta region and willing to address them.
He however stressed that there was room for improvement in the present efforts being made to improve lives of the people in the Niger Delta.
The Chairman  called on the Federal Government to pay more attention to the issues of pollution, the passage of the Petroleum Industry Bill, creation of Petroleum Industrial Tribunal,  the creation of oil city and check bunkering and pipelines vandalisation  and support more commercial and  industrial investments in the region.
Signed
SALISU SALEH NA’INNA
DIRECTOR (INFORMATION)