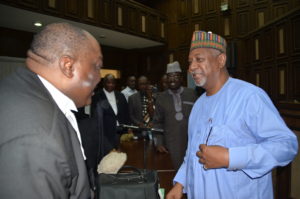 The late arrival of former National Security Adviser, Sambo Dasuki from security custody has stalled the commencement of his trial before Justice Peter Affen of FCT High Court, Maitama, Abuja

The proceedings could not go on due to the failure of the operatives of the Department of State Service (DSS) to produce the ex-NSA in court ‎on time and the need for the other co-defendants to respond to an application by Dasuki to stop the trial over failure of the government to obey the bail conditions granted him by Justice Peter Affen.

The operatives of DSS only produced the ex-NSA in court two hours after the court started hearing the matter and after Justice Affen had adjourned the case till February 26, 2016.

Others who are being prosecuted along with the former NSA with respect to charges of diversion of arm funds include a former Director of Finance in the Office of the NSA, Shuaibu Salisu, a former Finance Minister of State, Bashir Yuguda; a former Sokoto Governor, Attahiru Bafarawa, the ex-governor’s son, Sagir Attahiru, and a firm, Dalhatu Investment.

Before the adjournment, Dasuki’s lawyer, Mr. Joseph Daudu had complained bitterly that his client was rearrested to unknown destinations where his lawyers could not have access to him.

Mr Daudu said he had filed an application before the judge, arguing that the prosecution lacked the right to continue to prosecute him because of the flagrant disobedience of government to all bails granted to Dasuki from three courts.

EFCC counsel Rotimi Jacob said that he too had filed a counter affidavit and had just served the affidavit on Dasuki and others in the case.

Other counsels told the judge they needed time to respond to issues raised in the counter affidavit of EFCC and that the trial should not continue until the applications are concluded.

Dasuki was re-arrested by operatives of the DSS on December 29, 2015 shortly after he was released from prison upon fulfilling the bail conditions granted him by Justice Affen and two other judges which amounted to disobedience of the orders granting bail to their client.