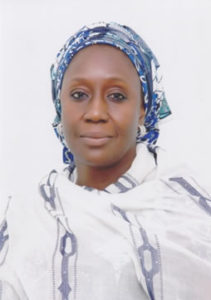 The Minister of State for Industry, Trade and Investment, Hajia Aisha Abubakar  has charged Nigerian Manufacturers to ensure that their products are of good quality.  The Minister  gave this charge during the signing ceremony of a Memorandum of Understanding (MOU) between Labora Shoes and GLOBAL Smartfit Nigeria Limited which took place in her office.
The Minister, represented by the Permanent Secretary, Aminu Aliyu Bisalla observed that the shoes displayed by the two companies were apparently of good quality saying that “as a nation we are proud of our commodities, we are proud of our products,  Nigerians generally are rational people, producers should ensure good quality because consumers want value for their money.”
Hajia Aisha Abubakar assured the manufacturers of the Ministry’s support for home made products through a formidable campaign with the aim of providing jobs for the teeming unemployed youths in the country describing their venture as  laudable. The Minister announced that  a  campaign for the patronage of made in Nigeria products would soon commence in the country.  She further pledged the readiness of the Government to support all similar initiatives not only on shoe product but on all small and medium enterprises (SMEs) stressing that the current administration was committed to it.
Earlier, Mr. Desmond Chunderlal and Chief Emeka Egbuonu, Chief Executive Officers of Labora shoes and Global Smartfit respectively, said they were in the Ministry to sign an MoU between the two organizations and seek government support for their plan to establish a model shoe factory in Nigeria  soon.  Chief Desmond said his organization currently has quality shoes made in Kubwa, Abuja and very soon these shoes would be in display in Mr. Price Super markets.  He said that the Federal Government’s ban on shoe importation encouraged him to look inwards since 2007.
He stated that his desire to give shoe production in Nigeria a boost was responsible for his decision to partner with Labora Shoes which is based in South Africa to establish an ultra modern shoe factory in Nigeria.  Chief Egbuonu therefore urged government to provide incentives such as land and grants for them.  The Chief Executive also disclosed that they have sent proposals to State governors to establish factories and train youths in shoe making business in the States and Local Governments if the governors were interested.
Umar Maryam Yusuf
For:DD Press.