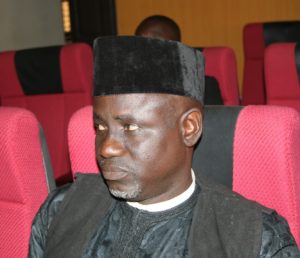 The Economic and Financial Crimes Commission, EFCC, on February 8, 2016 arraigned the General Manager, Gombe State Cooperative Savings and Loan Limited, Sani Musa, before Justice M. G. Umar of the Federal High Court Gombe, Gombe State,  on a three-count charge bordering on obtaining by false pretence and issuance of dud cheque.
Musa was alleged to have in May 2009 obtained a loan of N75, 000,000 from Guaranty Trust Bank under the false pretence that it was to be used by members of the cooperative for acquisition of household items.
On receipt of the said loan, however, he disbursed only N9, 000,000 and diverted N66, 000,000 for personal use – an offence punishable under Section 1 (3) of the Advance Fee Fraud and OtherRelated Offences Act 2006.
On August 12, 2009 he allegedly drew on the account name of Gombe State Cooperative Savings and Loans Limited the sum of N4,800,000 in favor of GTB. The following day, he issued a cheque of N30, 000,000 to GTB drawn on Asnib International Resources Limited account with Intercontinental Bank Plc. All the cheques upon presentation for payment were dishonored for insufficient fund and subsequently marked dud – an offence punishable under Section 1 (1) of the Dishonored Cheques Offences Act Cap D11 Law of the Federation of Nigeria 2004.
He pleaded “not guilty” when the charges were read to him.
Prosecuting counsel, Nnaemaka Omewa, thereafter, asked for a date for trial to commence.
Counsel to the defence, M. M. Mailomo, told the court he had filed an application for bail.
Justice Umar adjourned the case to February 10, 2016 for ruling on the bail application and ordered the accused be remanded in prison custody.
Wilson Uwujaren
Head, Media & Publicity