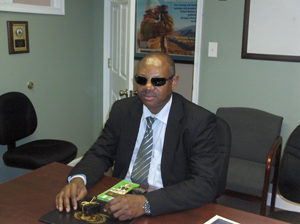 The attention of the Office of the Special Adviser to the President on Niger Delta/Coordinator, Presidential Amnesty Programme has been drawn to the front page lead story of the Wednesday February 10, 2016 edition of  one of the national dailies titled “Sleaze in Amnesty Office’s N48bn Expenditure in Five Months Exposed”.
This publication as was reported, does not represent the facts on ground and is capable of misleading the public and pitching the militants against the person of Gen PT Boroh (Rtd) and the Presidential Amnesty Programme.
The report can be gleaned from the fact that while the Amnesty Office defended its 2016 Budget before the Senate and House Committees on Niger Delta on Tuesday February 9, 2016, the report which is coming out 24 hours later, claimed that the budget defence was to take place on Wednesday February 10, 2016. This is despite the fact that the budget defence was public and covered by the Senate and House Press Corps.
Secondly, contrary to claims  that the Senators are angry with the Amnesty Office 2015 Budget Status Report, the Senators noted the fact that the Amnesty Office returned N416,222,850.55 unspent funds in the 2015 Budget.
Thirdly, the claim that “under the guise that there was no money to pay the ex-militants’ tuition and in-training allowances, Gen PT Boroh had ordered the students in universities in the UK, United States of America, Canada, United Arab Emirates, Russia, the Philippines, Belarus and elsewhere abroad, to return to Nigeria” is completely false. There was no such order whatsoever either by Gen Boroh or the Amnesty Office. Rather, only students on Pathway programmes with one year Visas returned home for renewal in line with UK Visa policy.
It is also false to claim that there was no money to fund the education of the students abroad. The Amnesty Office under Gen PT Boroh has paid all the fees and entitlements of students both abroad and in the country and has also paid all debts including those owed by the previous administration. These payments are verifiable from the Central Bank of Nigeria.
The main claim that the new administration “… in just five months awarded contracts worth about N48 billion”,  is also false. The entire contracts awarded by the Amnesty Office from September to December 2015 amounted to N12,953,293,844.57 for the Vocational Training and Empowerment (Business Setup) of Amnesty beneficiaries to sustainably reintegrate them into the society. However, a total of N17,684,000,000 was paid as monthly stipends and allowances to 30,000 delegates from April to December, 2015 as appropriated by the National Assembly.
The sum of N10,445,902,060.73 was expended on Tuition fees, In-Training-Allowances, Accommodation, Book Allowances, etc for students offshore and onshore. The balance of N6,307,730,247.61 is for Operations, Monitoring and Evaluation, Tickets, International passports and payment of debts from 2013 and 2014. Also, all the contracts awarded under the new administration passed through Tenders Board thereby complying with due process.
The payment of N510,000,000 as UTME fees for two months is false and misleading. Westerfield College was paid N509,100,000 as total cost for one year Advanced Level Programme for direct entry into Universities. This cost covers Tuition fees, Accommodation, Feeding, Insurance, Study tour, etc for 150 students.
From inception, no beneficiary exited the Amnesty Programme. However, within five months of assumption of office, Gen PT Boroh introduced the Exit strategy and will be exiting 3,232 persons which will save N2,520,960,000 for the Federal Government. A second batch of 1,040 who are currently being given Starter-Packs to establish their individual businesses are soon to be exited from the programme which will result in a further N812,760,000 savings for the Federal Government this year.
On the issue of vehicles mentioned, the Amnesty Office, in line with the 2015 Appropriation Act purchased six operational vehicles at the total sum of N69,300,000 and not N75,350,000. As in all other contract awards, this transaction followed due process and the Amnesty Office under Gen PT Boroh did not award any frivolous contract whatsoever as claimed by the Reporter.
Owei Lakemfa
Media & Communication Consultant
Presidential Amnesty Programme.