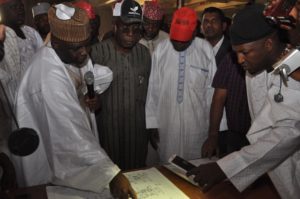 Minister of Agriculture and Rural Development, Chief Audu Ogbe has assured that the Federal government would support millers and investors in the rice value chain to ensure that Nigeria becomes self sufficient in rice production and even export the commodity.

He said huge potential for rice production exists in the country which he said can feed its growing population and export to earn revenue.
The Minister, who made the assertion during an inspection of A.A. Ibrahim Integrated Rice Mill Ltd., at Challawa Kano noted that the rice millers help in reducing poverty among small holder farmers by assisting them to grow from subsistence to commercial production.
He therefore commended that management of A.A. Ibrahim Integrated Rice Mill Ltd. for investing N6 billion in the project, which he noted, is on the verge of completion, promising that the Federal Ministry of Agriculture would assist the company with a rice color sorter to encourage its management.
Chief Ogbe also expressed satisfaction with the company’s zeal to create jobs for Nigerians and disclosed plans by his Ministry to assist rice farmers across the country to harvest the commodity and sort it without leaving behind sand particles.
In his remarks, Governor Abdullahi Umar Ganduje said to encourage agricultural production and avoid wastages of farm produce, “the state government is making efforts to provide conducive atmosphere and working relationship between the farmers and the management of processing complexes”.
He also said the government has provided moral and material support to rice and wheat farmers in the state to improve value chain initiative for enhanced economic output.
Governor Ganduje who mentioned that Kano is concluding arrangement for the Anchor Borrower Programme, powered by the Federal government, praised the founder of A.A. Ibrahim Integrated Rice Mill Ltd. for his vision and commitment to economic development of the state.
On his part, the Managing Director of A.A. Ibrahim Integrated Rice Mill Ltd. Alh. Abdulkadir Aminu Ibrahim stated that the factory was established to help in boosting rice production in the country, adding its production capacity is about 120, 000 metric tonnes per annum while providing 1,200 direct and auxiliary  jobs.
Ameen K. Yassar
Press Secretary,
To the Executive Governor, Kano state