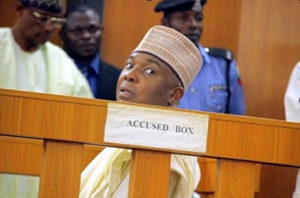 The Code of Conduct Tribunal has on Friday 18th of March 2016 fixed Thursday March 24, 2016 for ruling on the motion filed by the Senate President’s lead counsel – Kanu Godwin Agabi (SAN) seeking to quash the charges relating to asset declaration against his client, Bukola Abubakar Saraki (Senate President) before the Code of Conduct Tribunal.
The Code of Conduct Tribunal led by its Chairman, Danladi Yakubu Umar fixed the date in Abuja after taking the argument for and against the motion moved by the Defence Counsel to the Senate President, Kanu Agabi (SAN)  challenging the jurisdiction of the Tribunal which was accordingly responded to by the Prosecuting Counsel, Rotimi Jacob (SAN).
Earlier at the resumption of the matter, the Prosecution Counsel, Rotimi Jacob (SAN) objected the move by the Defence Counsel to adopt his motion, contending that the time for such is not ripe. He averred that the intent of Section 220, 221 and 396 of the Administration of Criminal Justice Act 2015 is to expeditiously deal with criminal matters without taking recourse to motions that are technical in nature at the expense of the substantive matter before the Tribunal.
“We have to respect the Act since the motion can only be considered along with the substantive matter as alluded by the ACJA 2015. The defence can wait till the end of hearing in the final address and the objection can be entertained and ruling be given at the final judgment, he explained. He cited the case of Audu versus FRN, urging the Tribunal to grant permission to him to call for his witness, in order for the court to proceed with the case. The defence argued that since they are the ones brought under suspicion and are desirous to proceed with the case to exonerate themselves from the said charges, the proceedings must be guided by law and the motions not be trivialized and ignored.
The Tribunal Chairman, Danladi Yakubu Umar ruled that the motion can be heard and fixed for Thursday 24thof March, 2016. Adding, the ruling on the motions raised are fundamental matters that border on jurisdiction. He called on the parties to be rest assured that justice would be done for the stability of the nation.
Ibraheem Al-Hassan,
Head, Press & Public Relations,
CCT HQ. Abuja.