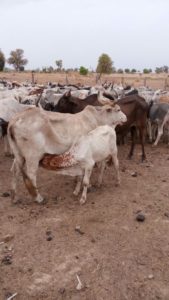 Troops of 1 Division Nigerian Army in conjunction with other security agencies within the last one week have recorded tremendous success in the fight against cattle rustling, armed banditry and criminality particularly in the north west under the auspices of Operation SHARAN DAJI.

In Zamfara State, which is 1 Brigade’s area of operation, the troops recovered 419 livestock  and arrested 1 bandit  and recovered a locally made pistol from him.

The ongoing operations are aimed at completely eradicating the menace of cattle rustling, armed banditry and other criminalities in the north west geo-political region of the country.

Kindly disseminate this information and the attached photographs to the public through your esteemed medium. Thank you for your usual cooperation. Colonel Sani Kukasheka Usman Acting Director, Army Public Relations