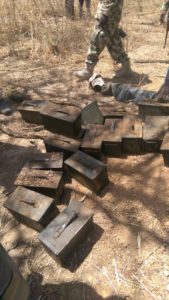 Following a tip off troops of Operation LAFIYA DOLE and some Civilian JTF today went on a clearance patrol to Borgozo-Alargano general area in which they discovered large cache of arms and ammunitions concealed by Boko Haram terrorists.

The Nigerian Army wishes to  appeal to all Nigerians and in particular, the good people of Adamawa, Borno  and Yobe States to continue to provide useful information to troops in order to facilitate complete routing of the remnants of Boko Haram  insurgents hiding in their  localities.