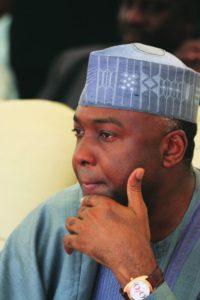 In a continuation of cross-examination of the prosecution witness at the Code of Conduct Tribunal yesterday in a case against the Senate President Dr Bukola Abubakar Saraki, on alleged false asset declaration, the Chairman Code of Conduct Tribunal re-affirmed the Tribunal earlier decision for the matter to be held day-by-day.
The re-affirmation came in Abuja, at the backdrop of a demand made by one of the defence counsel, Paul Usoro (SAN), for them to have sufficient time to study all the exhibits tendered by their experts, noting that this borders on his client right to fair hearing as grantee by the constitution of the country, which ignited a fierce argument between the contending counsels in the case.
Hon. Danladi Yakubu Umar-lead Tribunal upheld his earlier decision that the matter must come every day till its final determination as captured in the Administration of Criminal Justice Act (ACJA), 2015.
However, at the continuation of the cross-examination of the first prosecution witness, Michael Wetcast, was asked by the lead defence counsel Kanu Godwin Agabi (SAN), if any items in the petition written by the Kwara Freedom Network made any reference to the declaration of assets and if the witness investigated the Accountant General of Kwara State and the officials of State Primary Education Board (SUPEB) over the illegal transfer of funds. The witness said they were not part of his assignment.
He was further asked whether if he critically examined the petition of the group. He told the court that he did not and insisted that the said petition did not form part of the documents that led to the investigation by his team in 2014.
“The intelligence comes orally or in writing. Sometimes our sources want their reports to be protected and secret, and that is why we call it confidential; the different between the petition and the intelligence report is that people who give the intelligence report ask the commission to protect their identity.”
Subsequently, the matter was adjourned to today, 20th April, 2016 to commence 10.00am to 600pm, for continuation of completion of cross-examination of the prosecution witness.
Ibraheem Al-hassan,
Head, Press & Public Relations.
CCT HQ.