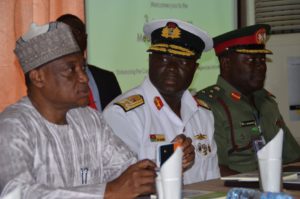 Security and Response Agencies in the country have been tasked on the need to be credible in their dealings with the media if the public must continue to repose confidence in those who are paid to protect them.
Former Special Adviser on Media and Publicity to the late President Umaru Musa Yar’Adua, Mr Segun Adeniyi stated this Wednesday in Abuja while delivering a paper at the ongoing Seminar on Media Engagement in Crisis Situations for Security and Response Agencies. The seminar is organized by the Centre for Crisis Communication CCC with support from the Defence Headquarters DHQ and the Nigeria Stability and Reconciliation Programme NSRP.
Entitled, “Media Perception of the Service Delivery of Security and Response Agencies in Nigeria”, the paper held that Nigerians do not place much trust in their security and response agencies.
He said although the role of the media is to tell the stories of these agencies with facts and figures but the onus is on the agencies to always make themselves available to the media.
“Down-playing the role of the media in national security can only encourage rumour-mongering”, he said.
He urged the agencies and the media to have a defined rule of engagement especially in critical situations which requires tactful reporting so as not to give away tips to criminals who are on the run.
Adeniyi who is the Chairman of the Editorial Board of ThisDay Newspapers said security agencies must begin to build respect for themselves. They must send a clear message to criminals that when they kill an operative, they cannot get away with it, he said.
He recalled the killing of DSS operatives few years ago by members of the Ombatse sect in Alakyo, Nasarawa state, and lamented that rather than going after the killers, the then leadership of the DSS declared that the Service had forgiven the killers even while the corpses of the operatives had not been retrieved and their loved ones still mourning.
Contributing to the paper, a former Director of Defence Information, Brigadier General MM Yerima said information managers should strive to build trust with the media as well as some level of interpersonal relations with journalists.
“The moment you are not honest with them, they will strike you”, he said principals of agencies should also be timely in given adequate briefings to their information managers because the news has to be reported and journalists would not wait for hours on end to get confirmation from crisis communicators.
The Seminar will come to an end on Thursday April 28, 2016 with a Communique.
by PRNigeria
PRNigeria encourages institutions to be transparent in their information management as it provides news items from authoritative sources for free use by the media