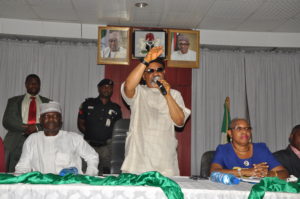 The Honourable Minister of Labour and Employment, Sen. Chris Nwabueze Ngige has disclosed that the Present Administration has set the stage for the establishment of Productivity Units in all Ministries, Departments and Agencies (MDAS) in the Country, as directed by President Muhammadu Buhari GCON in his address at the occasion marking the observance of National Productivity Day on 20th August, 2015.
The Minister stated this in Abuja today when he declared open a  Productivity Awareness lecture for middle cadre (Grade levels 07 – 12) officers who constitute the  target group that handle major functions in the Ministry and in the Public Sector.
Senator Ngige stressed that the awareness lecture is very important and dear to his Ministry because of its bearing on the success of the change mantra of President Muhammadu Buhari’s Administration.
“We are living in a time of change. The public service must improve its productivity in order to achieve growth and vitalize the Nigerian economy against the backdrop of accelerating globalization and International Competitiveness, exponential increase in the unemployment rate and the dwindling oil revenues.”
He noted that, there is no doubt that the service needs to be attuned to its responsibilities not only as a source of policy advice and primary executor of programmes, but as the custodian of data and information on which decisions are to be based.
The Minister emphasized that “Productivity is universally acknowledged as crucial and critical to a country’s competitiveness and its integration into the global economy. In the same token, it has been acknowledged that economic downturn, decline and stagnation can be traced to low productivity, adding that it is in realization of this fact that the Federal Government has continued to invest heavily on reform programmes directed at transforming the public service to tackle head-on the various challenges that have threatened our survival as a nation, impaired our productive growth and denied us the full dividends of democracy.” He concluded.
In his address, the Director-General National Productivity Centre Alhaji Kashim Yunusa Akor noted that presentation of the lecture which has been designed for all Ministries, Department and Agencies (MDAs) is predicated on the need to sharpen the skills and competences of the human resources in the public service for improved productivity and efficient service delivery.
He emphasized that the specific objectives of the lecture are to inculcate in   participants the right attitude to work and to enable participants to understand the concept and importance of productivity, to discuss the impact of productivity improvement in the workplace, to introduce participants to the basic productivity improvement tools and techniques, and to propagate productivity consciousness in the public sector.
“It is important that the staff of the Ministry of Labour and Employment more than any other Ministry should be the Productivity champions and change agents. You must at all times strive to improve all situations no matter how good they may look. Productivity is all about constant improvement and attitude for progress. We must eschew low productivity in our work places as productivity remains the ultimate key to economic growth and development of any nation.”  He concluded.
Samuel Olowookere,
Deputy Director (Press).