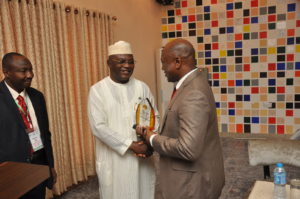 Immediate past Director of Defence Information, Gen. Chris Olukolade (retd) has charged information managers of defence, security and response agencies to leverage on the use of the social media to mitigate the current wave of crisis across the country.

Olukolade gave the charge on Thursday in Abuja at a seminar organised by the Centre for Crisis Communication (CCC) for information officers of Defence, Security and Response agencies.

Delivering a paper titled, “Strategies and Techniques for Engaging the Media in a Crisis Situation”, the former defence spokesperson said the use of communication technologies helps to broaden news of crisis and possibly mitigate the effects of failure to plan.

He was however quick to concede that for maximum effect, the social media should be used in conjunction with the traditional media during crisis situations.

In order to guard against inaccuracies and speculative reports, Olukolade said it is the task of the information manager to ensure that regular briefing is a core aspect of his strategy.

“The information manager must also take into cognizance the impact of the social media in developing his media strategy. This is because the social. Media presents new complication that was hitherto non-existent. Any forward-thinking organization should as a matter of priority have a strong social media presence as a way of engaging its stakeholders especially the media”, he advised.

In his remarks at the occasion, the Chairman Forum of Spokespersons of Security and Response Agencies (FOSSRA) and Director, Defence Information, Brigadier General Abubakar Rabe said the armed forces and other security agencies are really facing the menace of not just the Boko Haram sect but series of other crisis across the nation that need proper information dissemination.

He said “So far, a seminar of this nature would provide some added knowledge for those of us who are still practising especially in crisis situation towards ensuring that the citizens are adequately educated and informed, especially on the need for security consciousness at all time,” he said.

According to him,a lot needs to be done in crisis situation and that handling such situation should involve input from other stakeholders including the political class.

Brigadier Rabe urged the media to be patriotic and strive to mitigate crisis through their reports, and by also cutting off the oxygen of sensationalised publicity that it often tends to give to terrorists and other miscreants.