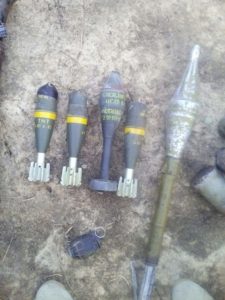 The troops of 21 Brigade, 7 Division,  have continued their offensive operations  against the Boko Haram terrorists still hiding in the Sambisa forest.

On Sunday 8th May 2016, the troops have cleared 4 villages in the terrorists enclave which include Bala Karege, Goske,  Harda and the famous Markas 3. There was no encounter with the terrorists in all the villages as the Boko Haram terrorists have abandoned their huts and ran away.

Unfortunately, the troops ran into an ambush at Harda village, while advancing. The resilient troops  successfully cleared the ambush without any casualty and proceeded with the operations.

The troops also recovered  10  vehicles and 50 motorcycles belonging to the fleeing terrorists.

In a related development, Boko Haram terrorists from another part of Sambisa forest, were reported to have taken advantage of the heavy downpour that occurred to move closer to the troops.

Updated
Meanwhile the troops were exploiting aftermath of the attack by Boko Haram terrorists on their location last night in Sambisa forest  despite unclaimant climatic conditions.

Please be informed that 8 more Boko Haram terrorists dead bodies were found this morning in addition to other recoveries made. Therefore, attached here are more photographs of the recoveries that include vehicles, arms and ammunitions.

In a related development,  yesterday Monday 8th May 2016, at about 10.30pm,  3 Boko Haram terrorists went to Puchi village to tax the community. On received of information, troops of 7 Division  mobilized in conjunction with some Civilian JTF to the area.

On arrival, they found out that the residents have apprehended 2 of the terrorists and lynched them, while the third one narrowly escaped according to reports.

The troops recovered1 AK-47 rifle,  1 rifle magazine and 8 rounds of 7.62mm ammunition and a Dane Gun. 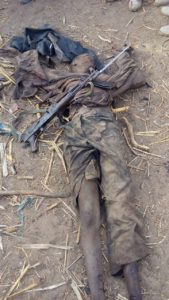