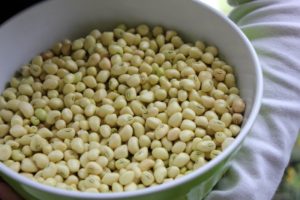 The Federal Government is making all arrangement to reposition the cowpea sector for better production and marketing. The Minister of State for Industry, Trade and Investment Hajia Aisha Abubakar made this known in Abuja during the inauguration of the executive of the Federation of Cowpea Farmers, Processors and marketers Association of Nigeria, (FECOFAPMAN).
The Minister said, “promoting sustainable development of Cowpea Value Chain is not only appropriate but equally timely now that the Federal Government is putting in place all necessary mechanism to transform the subsector following the European Union actions on beans exported from Nigeria on the ground that the rejected beans were found to contain between 0.03mg to 4.6mg/kg of dichlorous pesticides when the acceptable maximum residue limit is 0.01mg/kg
Hajia Abubakar noted that investment in the agricultural sector provides abundant benefits for both individuals and government. She stressed the great potentials of cowpea in contributing positively to the growth of the gross domestic product as well as job and wealth creation. However, she lamented the lack of diversified industrial use of the product despite it’s high potential as an industrial crop. This she attributed to lack of reliable statistics on production, price fluctuation, lack of primary processors etcetera.
The Minister said as part of effort to promote the sector for better performance and compete favourably at both local and international markets, the federal Ministry  of Industry, Trade and Investment would assist the association to ensure value addition to its products. Hajia Abubakar charged the Federation of Agricultural Commodities Association of Nigeria, (FACAN) to coordinate the activities of Cowpea stakeholders in Nigeria for effective operation. She also urged the Cowpea Association to work closely with the Federal Ministry of Agriculture and Rural Development and other relevant stakeholders, so as to benefit from government policies and programmes aimed at developing the sector.
Earlier, the National President of the Association, Alhaji Muhammed Kabiru Shittu, implored Nigerians to pay more attention to the sector. He disclosed that Cowpea was the third most consumed food stuff in Nigeria and West Africa. Alhaji Shittu however noted sadly that most of the beans consumed in Nigeria were from Niger Republic even though Nigera had better soil for beans farming.
Alhaji Shittu also hinted that the European Food Safety Authority had issued about fifty notifications on the low quality of beans from Nigeria due to pesticide misapplication. He cautioned that if no attention was paid to the issue, Nigeria beans export which was expected to attract about 500 Million Dollars would be jeopadised. He however informed the Minister that his association was doing it’s best to overcome the problem.
He sought the assistance of the Ministry in areas such as: the development of Cowpea Chain as being done for Rice and Cassava, support in research and development for improved seeds and acceptable agro – chemicals for Cowpea farming, capacity buiding workshop on good agricultural practices and market linkage.
Umar Maryam Yusuf
For: Head of Press.

Why I Re-Appointed Kashifu Inuwa as NITDA Director General – Buhari