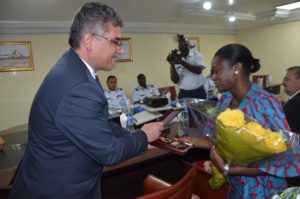 In the spirit of the existing cordial relationship between the Czech Republic and the Nigerian Air Force (NAF), the Czech Republic Government has offered a postgraduate scholarship to the wife of late Wing Commander Chinda Stephen Hedima to study Epidemiology at the Czech Defence University, Prague. Late Wing Commander Hedima was killed in      September 2014 by the Boko Haram Terrorists while on operation in Northeast Nigeria. The senior officer, before his demise, had his combat simulator training on the Alpha Jet with Aero Vodochody in the Czech Republic. The full scholarship award to Dr (Mrs) Hedima was in recognition of the ultimate sacrifice by her husband in the ongoing counter-insurgency operation in the North East.
Presenting the award, the Czech Republic Deputy Minister of Defence, Tomas Kuchta, said that the gesture was an extension of the friendship between the Czech Republic and Nigeria, and in recognition of the gallantry act exhibited by the late senior officer in the service of his fatherland. He recalled that late Wing Commander Hedima put-up good performance, and was disciplined and friendly during his training in the Czech Republic. He also used the occasion of the scholarship award to extend the condolence of the Czech Ministry of Defence to the people of Nigeria for the great loss.
In his response, the Chief of the Air Staff (CAS), Air Marshal SB Abubakar, who received the Czech Republic delegation in his office, noted that the NAF was witnessing for the first time the kind of gesture demonstrated by the Czech Republic. Air Marshal Abubakar described the late Wing Commander Hedima as a brave and hardworking officer who lived a short but very successful life, describing his death as noble in laying down his life for a just cause in the defence of humanity. Furthermore, the CAS commended the Czech Republic for placing humanity above capitalist interest in business relations and added that “the Nigerian Air Force will continue to celebrate her fallen heroes”. Air Marshal Abubakar stated that the gesture by the Czech Republic would go a long way to encourage other NAF personnel to put-in their best in the service to the Nation.
You are please requested to disseminate this information through your mass medium for the awareness of the general public. Thank you for your usual cooperation.
AK FAMUYIWA
Group Captain
Director of Public Relations & Information
PRNigeria encourages institutions to be transparent in their information management as it provides news items from authoritative sources for free use by the media